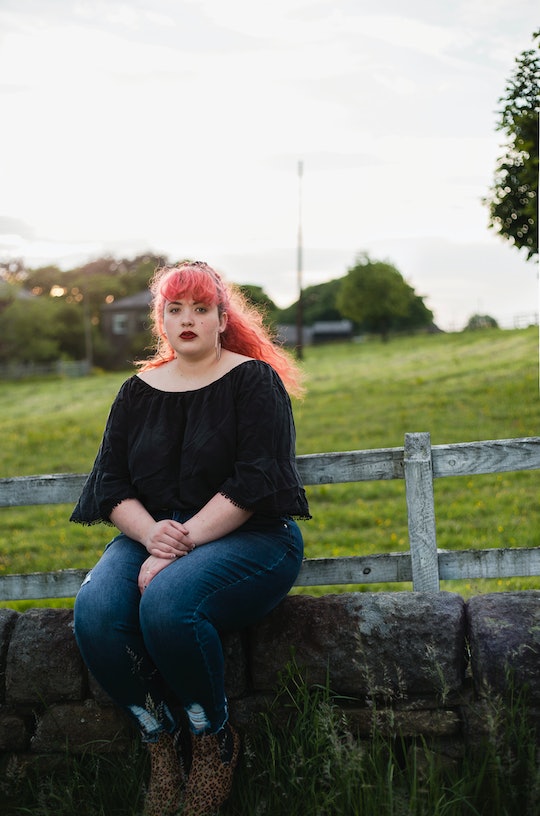 Having A Baby Made My Social Anxiety Worse

Last week, I did something I really wanted to do. My partner and I went over to our friend's apartment for a vintage video game night, and I was looking forward to breaking out the Super Mario Sunshine and meeting my friend's new girlfriend. Aside from taking my 6-month-old to checkups and making a few grocery store runs, I hadn't left the house in a few weeks. I was ready to inhale pizza and maybe some beer outside of the home.

Shortly after arriving, however, I felt my hands begin to shake ever so slightly. My heartbeat quickened as my upper lip perspired. I felt myself unable to engage the new girlfriend in conversations longer than five to 10 words. I knew exactly what was happening: I have social anxiety that was exacerbated by having a kid, and these days, this sort of thing occurs frequently when I'm out in public.

She told me she liked fossils and I thought that was cool, but I couldn't think of any follow-up questions to ask her. I then felt myself grow paranoid about what they must've thought of me. "She's so awkward," they may have said later. "She's aloof and uninterested in being here and obviously too uppity to slay at 2001 GameCubing."

I cannot remember ever not having social anxiety. In fourth grade, two girls I'd desperately wanted to befriend had asked me if I'd like to play some kind of sport with them at recess, and I knew nothing about sports. I was so nervous that I puked up Keebler crackers on my desk. Years later, I broke up with a perfectly decent high school boyfriend because I was too afraid of meeting his friends, all of whom existed on a slightly higher plane of popularity than I did.

Since having my daughter, my social anxiety has increased to an unprecedented degree.

I avoided large gatherings throughout most of college, certain that underage drinking with cute co-eds wasn't worth the inevitable claustrophobia and panic attacks. My social anxiety has never just been about worrying about what others might think of me: it's about worrying about how little I understand other people in general. I tend to second-guess everything I ever say or think, which doesn't help, either.

While I've gone through periods of reduced anxiety at different times in my life, social or otherwise, they've never lasted longer than a couple of months. But since having my daughter, my social anxiety has increased to an unprecedented degree.

What I find especially interesting about my current state of mental health is that, in many ways, having a baby has made me feel a lot better. My daughter's arrival allowed me to re-shape my career into something I am more comfortable with and less stressed over, even if it means I'm living paycheck to paycheck. My partner and I have ultimately grown closer, despite having a few mega fights at 3 a.m. I moved to a town that I love, close to a city that I love, near family and friends who I love. I definitely struggled with postpartum depression during my daughter's first two or three months on the planet, but these days I'm feeling cautiously optimistic. This is rare AF for me.

But while other aspects of my life have improved, my social anxiety has gotten much worse. In the past six months, I've canceled more plans than I care to admit. I've flaked on hang-outs that I had every intention of attending. I'm also much more technophobic than I was before. Every time a social media or text notification pops up on my phone, I'm reminded of the dozens of messages I still haven't responded to and, subsequently, the dozens of people I'm certain I'm letting down.

Since having a baby, I have not had the time nor energy to practice being in social situations.

As far as I can tell from reading hundreds of parenting forums online, postpartum anxiety (PPA) isn't remotely rare. In fact, two 2013 studies theorized that PPA is more common than its more well-known cousin, PPD. "I fear that I don't know how to hold a conversation or I don't know how to act around people," one mother wrote on a What To Expect group board. Some experts also suspect that PPA is exacerbated in women who are already prone to anxiety.

When I think about this all logically, I suppose it makes sense. I'm naturally anxious by default, particularly in social situations. And since having a baby, I have not had the time nor energy to practice being in social situations. My human-to-human interactions are regularly limited to an infant who cannot yet engage in a conversation.

When you have a baby, leaving the house is a chore that requires lots of preparation. Pumping enough milk to leave my daughter with a sitter is a never simple. Taking the baby on adventures requires the utilization of an inventory list, lest I want to end up in the middle of Camden Market with a baby who's pooped through three layers of clothing and without a wipe in sight. Feeling awake enough to get up and go is another story entirely. I also work from home. All of this combined means that I rarely see other grownups on a regular basis.

A large part of my current social anxiety also stems from the fear of being the only parent in my circle of friends. I don't want to be known as "the one with the kid." Don't get me wrong: I adore my daughter, and I'm not remotely ashamed of having a kid at 26. That said, I don't know many other moms. My friends are mostly millennials who have either sworn to wait until their mid-to-late 30s to have children or who have eschewed the idea of having babies altogether. They'd most definitely rather be out at a club or at a trendy cocktail bar post-work instead of sitting at home changing diapers.

So when I'm out with my friends, I worry that I'm talking about my kid too much. I worry that it'll seem to folks as though all of my other interests and hobbies and opinions have been replaced by my thoughts on the best diaper rash ointment. I worry that I don't know how to be just me anymore. The me who isn't just a mom.

I don't know how to strike the balance between old-me and mommy-me in a way that doesn't feel like a lie. Like I'm putting on some kind of performance.

When I think about all the folks I haven't met, however — the ones who I may encounter should I actively socialize in public —I just don't know how to be around them. I don't know how to strike the balance between old-me and mommy-me in a way that doesn't feel like a lie. Like I'm putting on some kind of performance.

That's what socializing feels like these days: a performance during which the protagonist struggles to "be herself," because she's not entirely certain who that is. She's never really been certain, and she's always been the nervous sort. Having a baby only confused things further.

But maybe that's OK. The people who are worth talking to will understand.

More Like This
Does The FDA's Plan To Limit Lead In Baby Food Go Far Enough?
Paris Hilton Is Officially A First-Time Mom
When Does A Baby Recognize Their Father? A Pediatrician Explains
Covid Vaccine “Deserts” For Kids Under 5 Make It Almost Impossible For Parents To Find Shots
What Parents Are Talking About — Delivered Straight To Your Inbox