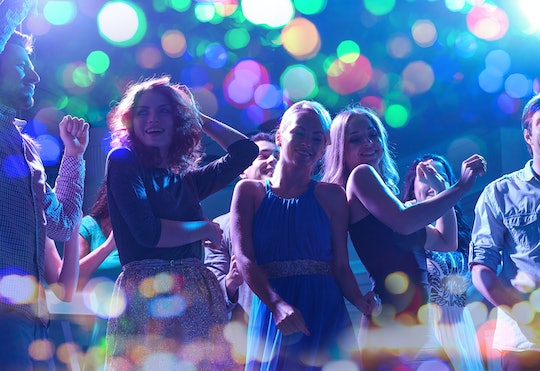 We've all got our own assumptions and expectations about how our lives are going to change after we've had kids. There are plenty of things that are incapable of remaining the same, sure, but the basic needs and/or wants that you had prior to procreating, are (for the most part) going to stick around. For example, I still needed a night out with my friends after I became a mother (and arguably even more so). However, while that need may have stayed the same, a night out with your friends before having kids vs after having kids? Well, that's an entirely different story.

Social events and bar outings may be fewer in number once you've successfully reproduced, but maintaining friendships is so damn important, especially when it comes to a mother's ability to maintain her overall well-being. Like, just because you became a mom doesn't mean that you should be shackled by your maternal responsibilities every hour of every day for the rest of your life. Um, no, that's not how it works.

If anyone deserves a night out to cut loose and get away from it all, it's a mom. I mean, raising kids is great and beautiful and fun and all, but it's also stressful. So stressful and so exhausting and, um, did I mention stressful? When you wake up every day to the tune of a crying baby and spend that remained of said day in a spit-covered t-shirt while taking care of an all-consuming human that's sometimes stubborn or crabby or constipated, it's understandable that a person would get a little stir crazy. I know we're not supposed to say that giving every ounce of ourselves to another human isn't amazing every hour of every day, but I'm going to say it anyway: taking care of someone else every hour of every day isn't always amazing. There's a reason that moms and wine form a perfect union.

Moms want to have fun too, and going out with friends is (sometimes) exactly what a mother needs to rejuvenate her spirit and get herself back to neutral. Still, going out after you've had a kid is slightly (okay, really) different than it was before you became a mother. I'm not saying that it's not still fun, because it is. I'm just saying that while you're out with your friends, you might realize that you really turning into your own mother. If you're wondering what having a baby will do to your social life, consider the following differences:

More Like This
Stepmom Quotes & Sayings For Every Occasion
From Captions To Gifts, These Are All The Kindergarten Graduation Ideas You Need
43 Instagram Captions For National Brother’s Day That Say It All
Say What's In Your Heart With These Stepmother's Day Quotes