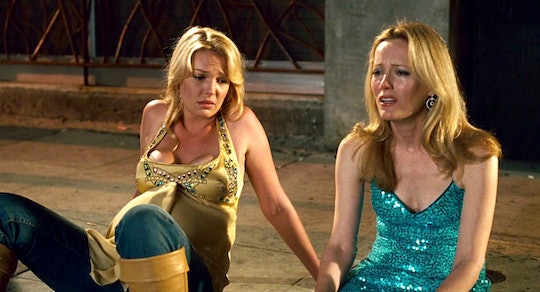 What Will Having A Baby Do To Your Social Life? Here's The One Thing You Need To Know

One of the reasons I used to be very adamant about not wanting to ever have children was that I was truly, madly, deeply in love with my social life (bonus points to your house if you got the reference). My younger self saw the idea of having kids as one that would inevitably clip my wings and render me a prisoner, destined to never again make it to a Friday night happy hour or a Wednesday ladies night or a Sunday in-the-biz getty. (Yes, I hung out at a LOT of bars, OK? Don't judge my journey.) Before kids, I was traveling whenever I felt like it, riding busses, going on road trips, booking random flights, doing the whole couch-surfing bit (this was pre-Airbnb). I imagined what I wanted my life to look like, and babies were not a part of it.

But you know, life happens, birth control fails us, or we get swept up in the magic of a relationship, or we just change our minds about kids, and suddenly 10 months later, we're covered in baby drool and dirty diapers. No, really, I know that sounds frightening and even a bit bleak, but it really isn’t that bad. In fact, it’s pretty amazing. I hang out with this incredible (not to mention absurdly adorable) toddler day after day and I get paid to write about it, so really, it has worked out tremendously.

But if you had told me this prior to having my kid that I would become a mom, let alone love being a mom, I never would have believed it. I was the baby in my family, meaning that I never once changed a diaper before my having my son. I had some very minor child-rearing experience from watching my baby nieces occasionally, but I never so much as fed them a bottle, nor did I have any idea how to give a baby a bath or burp a baby or anything else of that nature.

Truth be told, pre-baby me just didn’t like kids much. I was always the first one to roll my eyes at parents letting their kids run amok in stores. I couldn’t stand when people brought their brood to the damn bar, even if it was a bar slash restaurant. And don’t get me started on what my feelings were on parents who brought their kids to the movies (OK, I’m still not big on that even now, but I digress.) The point is, I was kind of an anti-kid jerk. And I realize now (and honestly, probably would've admitted back then) that more than hating them, I was terrified of losing everything I loved about my child-free life, and was thoroughly convinced that having a kid would take it all from me. Losing my friends, losing my freedom — I was convinced that my social life would be totally over.

And these feelings were despite the fact that I knew a few parents who still managed to make it out to a friend’s birthday from time to time. I knew of a mom who had raised a daughter into her teen years and seemed to have a healthier social life than I did, studying law while making it to study nights and networkers, cooking brunches for friends, planning surprise parties for her besties. I had a friend who was a dad yet he still managed to play in a band, work full-time, and even start a garden with his daughter. And I had another mom friend who worked, had two kids, and had reinvented herself as a sassy (and drop-dead gorgeous) pin-up model. The possibility of having a social life while also being a parent did appear to maybe not be completely impossible. I mean, hell, look at Beyoncé...

But then I also had friends who were on the complete opposite sides of the spectrum: I had one friend who moved away, had a baby, and completely fell off the face of the earth for a few years. When she finally did emerge, her Facebook user photo (and every photo after that) were all of just her son. And then I knew another mom who still lived in town (in my neighborhood even) who had vanished from all social circles. Her life now revolved around her toddler boy, and I never even so much as heard from her until she found out I was also pregnant with a boy. Another friend of mine married a guy who also had a baby, and while she made the effort to attend our social gatherings now and again, she usually asked whether it was OK to bring the child or not because otherwise she couldn’t make it. This didn’t seem like the type of social life I wanted.

So here’s the thing: If you’re terrified that having a baby will undoubtedly mean the end of your social life, you’re wrong. It’s not the end at all. And the one thing you really need to understand is that your life does not simply stop after babies, but rather, it evolves.

The one thing you need to know is that your social life WILL change after you have a baby — but it's not going to die.

Just as humans have evolved over time to deal with the various challenges that have come our way, so too will your social life. And this is more or less a breakdown of how it will work:

First, You Will Have The Baby

Next, you will become completely infatuated with said baby and promptly forget about everything else in the world, even if you don’t mean to.

After that, you will become a sleep-deprived zombie who does nothing but cater to your baby’s every needs. You will inevitably stop giving a sh*t about everything, including your former preoccupation with your social life and the need to fill in every night on the calendar.

Then time will pass, and you will miss your friends. This part sucks.

But here's what happens next:

You will call or text your friends to come by and hang out with you and your kid. You'll start doing this more. You will eventually get a sitter to watch your kid, and you will go out for an hour or two, maybe to dinner with friends, maybe on a short date with your partner. You will very likely not go out as often as you used to, but that’s because you’ll probably be too busy building towers out of blocks or racing toy cars or pretending you’re at high tea or introducing your child to Star Wars to care as much as you thought you would.

You’ll Also Find New Reasons And Ways To Be Social

Instead of making it to a new club opening, you’ll take your kid to story time at the library and make friends with other parents. Or you’ll join a mommy-and-me yoga class or walking group or playdate meetup and get your kid to be social with other rugrats while (at first awkwardly) getting to know the other human beings in your neighborhood who also decided to keep the species going. This is when you begin to truly realize your social life as you used to know it may not exist, but a different, new social life will emerge.

It will be totally up to you to make this transition. Every parent is different, so while some might be ready to take a weekend trip without the kids after a few months, others might not be comfortable until their kids are of speaking age, or maybe even never. But your life will evolve.

For me, having kids meant realizing who my real friends are. It also meant letting go of toxic people in my life. These were mostly old "friends" who were really just drinking companions but mostly spoke negatively about everything and didn't bring any value to our friendships. Being a parent really makes you reprioritize your time. If I’m only going to get to go have a fun night out once or twice a month, I am sure as hell not wasting it on someone who says terrible things or makes me feel bad for existing. No, thanks.

Having kids also really put a fire under my ass to start doing all the things I’d been too lazy to do before. Even though I have less time now, I am also way more motivated. This is probably the best part of the social life evolution. You begin to do things like go back to school or volunteer your time or get a job your love or start a business on the side that you can do from home because now you have someone else depending on you, who is also your biggest cheerleader and motivator, who you want to make proud of you. So you find new ways to be social, like joining networking groups online and in person to help you achieve your goals. It is seriously amazing how much having kids can force us to be more successful.

I’m not saying everyone goes down this path, but many of us do. So if you’re pregnant right now, racking up some major FOMO because you can’t fly off to Paris on a moment’s notice: stop. Your life isn’t going to end. Instead of stressing, embrace the way it’s going to evolve. You might surprise yourself how much you end up loving this new life, filled with not only the occasional girls night or date night, but also trips to the playground, coffee dates with fellow moms, holiday parties with kids in tow, and more visits to the library than you probably ever had before — and that’s a beautiful thing.