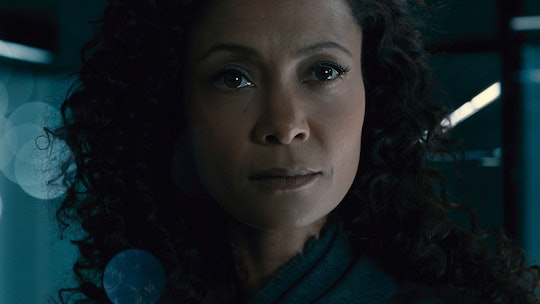 Just when I thought that I was out, they pull me back in. Game of Thrones aired its series finale on May 18, and HBO premiered the Westworld Season 3 trailer, reminding television viewers everywhere not to cancel their HBO subscriptions just yet.

The surprise promo revealed that Season 3 of Westworld wouldn't be released until 2020. However, there's plenty to be excited about, as the sci-fi series created by Lisa Joy and Jonah Nolan teased its newest cast members — Aaron Paul and Kid Cudi. The Breaking Bad alum and American actor will be joining stars like Ed Harris, Evan Rachel Wood, and Thandie Newton as Westworld ventures to new territory for its third season.

Following the Westworld Season 2 finale, The Hollywood Reporter spoke with Nolan in regards to his vision for Season 3 now that hosts like Bernard and Dolores are guests. Nolan explained:

I think it's a radical shift. What's compelling and appealing about these characters is that they're not human. As we said in the show, humans are bound by the same loops the hosts are, in some ways even smaller. You couldn't expect human characters to withstand and survive the kind of story that we're telling. The hosts have a different version of mortality, a different outlook. I think clearly with Dolores, as she's laid out, there is a longer view here, a larger set of goals. They're existential. They span eons. And that's a fascinating level of story  to engage in.

Regardless of what happens when Westworld returns, the "radical shift" Nolan was talking about is clear in the show's first trailer for its third season. In fact, some fans were left a little shocked. And TBH, I don't blame them.

Other fans couldn't help but put their Westworld dreams on the Game of Thrones finale, especially considering how the final season has gone so far. And quite frankly, some of these fan theories sound wild enough to work.

On Twitter, writer Heather Anne Campbell wrote, "I will give HBO a thousand dollars if they reveal in the final episode of GOT that all of Game of Thrones has been a fantasy theme park in Westworld and that everyone is robots."

Meanwhile, as fans were left reeling from the Game of Thrones finale, many more are coming to terms with Westworld's Season 3 premiere date, which is... a year from now.

Nonetheless, with an epic teaser unveiling new characters and a radical shift in scenery, most Westworld fans were just happy to have something to look forward to now that Game of Thrones has finally come to an end.

With Game of Thrones ending its eight year run, it looks like HBO is ready to let Westworld take on its new role as the network's biggest show. And from the looks of the new promo trailer, I bet they'll be more than up for the challenge.