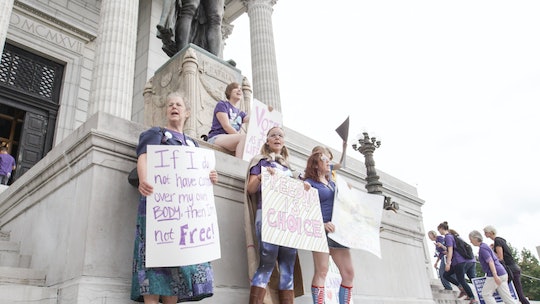 There is perhaps no more heated debate than the one which surrounds abortion and a woman’s right to choose in America. Although nearly half a century has passed since the landmark ruling in Roe v. Wade that secured the right to safe and legal abortion, the topic remains a source of political turmoil. In the new HBO documentary, Abortion: Stories Women Tell, viewers are invited to glimpse into the lives of the women affected by the reality of abortion — and provides insight on what the ever-changing landscape of women’s health in America means for them.

With the federal government turned over into the hands of Republicans, many of whom are pro-life zealots, the future of a woman’s right to choose is more uncertain than ever. In recent years, a number of state lawmakers have sought to restrict access to abortion, taking on extreme measures to promote their pro-life agendas. One such state is Missouri, the backdrop for the HBO documentary, whose anti-abortion legislation has left only one licensed abortion clinic — a Planned Parenthood in St. Louis — in the entire state, where an estimated 1.2 million women of reproductive age live. The state also requires a 72-hour waiting period, which, in combination with the already restricted access, has left many women in Missouri crossing state lines to seek care at Hope Clinic in Granite City, Illinois.

Director Tracy Droz Tragos, a native of the state, began filming on the eve of the 72-hour waiting period becoming a law. (The law provides no exception for rape or incest.) Given the time and place, you may expect a hard-hitting advocacy piece, but Tragos doesn’t seek to tell the story of political turmoil. She seeks, quite simply, to tell the stories of women. All women.

The film turns its lens onto the women of Missouri: abortion providers, pro-life advocates, clinic guards, women on the day of their abortions, women grieving their abortions, women who chose to continue their pregnancies, women who find themselves facing the unthinkable choice of ending a much-wanted pregnancy due to horrible defects. The filmmakers themselves are largely absent, as women are left to tell their narratives without the framework of slanted questions or well-edited drama that is trademark in so many abortion-related films.

“For me, it was important to make this [a] film that hadn’t been made before,” Tragos tells Romper. “I felt like what was missing was hearing from women and elevating women’s stories, not hearing from politicians or advocates, but really hearing directly from women about their experience and how they came to make the choices that they made.”

One woman, MJ, speaks evenly of her choice to obtain an abortion as a matter of self-preservation. “If I had had a baby with that man, I would’ve killed myself,” she says in the film. “I averted a disaster.”

The result is a stunning patchwork of women’s stories, presented not with a sharp political agenda, but rather a hope for understanding. Audiences are invited in to share in these stories, to walk alongside the women of Missouri and really hear them, no matter which side of the debate they claim.

The documentary divides screen time between a number of stories that weave their way through the film, including that of Amie, a 30-year-old single mother of two, who works over 70 hours per week to support her children. She must drive a round-trip total of nearly 400 miles to obtain an abortion at Hope Clinic, returning to life as normal immediately afterwards. She tells her story through tears, stating that she would be physically incapable of working while pregnant or caring for a newborn. This isn’t simply the best choice — it’s her only choice if she wants to continue providing for her family.

Other women in the film tell different stories of necessity. One woman, MJ, speaks evenly of her choice to obtain an abortion as a matter of self-preservation. “If I had had a baby with that man, I would’ve killed myself,” she says in the film. “I averted a disaster.”

While these raw stories serve up an intimate view of the reality some women face, they're not the only ones highlighted. One of the unique traits of the film is that it allows pro-life women to be central figures, sharing their views without judgment or slanted questioning. One of the key narratives the film follows is that of Kathy, a devout church-goer who has devoted her retirement to the pro-life movement. She recounts her origin story as a pro-life advocate — a day she passed a Planned Parenthood sign, and saw her middle name “Anne” in the middle of “planned,” taking it as a sign from God to “get in the middle of this thing.”

Tragos hopes the documentary will lead people to the discussion with a more open heart and mind, and a better understanding of just how deeply personal a woman’s right to choose is — especially when reproductive rights are in such peril.

Giving audiences a truly balanced compilation of narratives, Kathy’s story is given equal weight and respect as the other women in the film. Instead of being cast as a villain, she is left to speak her truth, and is even given her own tearful moments. It becomes amply clear throughout the film that she believes in her heart she's doing the right thing.

For Tragos, the choice to tell a wide range of women’s personal stories was the key to taking the conversation surrounding abortion and putting it into context. Of taking a backseat to the stories of other women, she tells me during our interview:

This was really a chance for me to practice openhearted, active listening and walk in the shoes of the women I was sitting with. It wasn’t easy because I didn’t always agree, but I wouldn’t be worth my salt as a filmmaker if I only told the stories of people I agreed with.

The documentary, which premieres on HBO on April 3, makes a concerted effort to give a platform to as many women as possible, seeking to bring in the voices that have long been relegated to the sidelines in the clamor of political debate. The stories of these women are much needed in a time when those making decisions about women’s reproductive health are without skin in the game, as we saw recently when an all-male panel decided the fate of maternity care under the AHCA.

“It’s not a political film, and I hope it doesn’t moralize one way or the other, but still makes a case for personal decision-making,” Tragos says of the film. Tragos hopes the documentary will lead people to the discussion with a more open heart and mind, and a better understanding of just how deeply personal a woman’s right to choose is — especially when reproductive rights are in such peril.

“I don’t think the film is going to make anyone who is pro-choice pro-life, or pro-life pro-choice, but I do think the film has the power to bring a lot more compassion into this,” Tragos says. Perhaps that is exactly was this conversation needs: a willingness to listen and empathize with women, no matter where they stand.