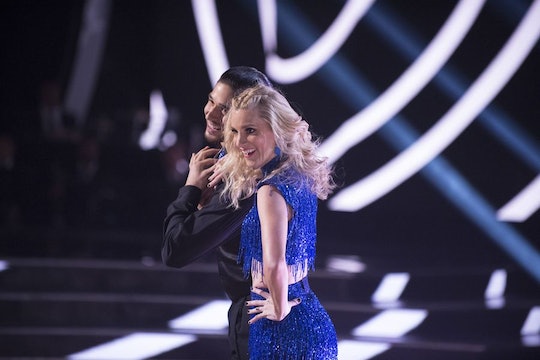 This wasn't Heather Morris' first time being Britney, since she's done it before on Glee and even played a character named Brittany S. Pierce, so no one expected her to do Britney and not be amazing. But Heather Morris' "Toxic" tango on Dancing With the Stars was a perfect throwback to her days on Glee. And even if you never knew her on the musical series, you can totally appreciate the way she channeled Britney Spears on DWTS. It was a performance that also earned her the first score of nine from one of the judges so far this season, so that says a lot right there.

Even though Morris has done Spears before, she said in her package that she never performed a Spears song while doing a ballroom dance. But, you'd never know, since it couldn't have been executed any better. From the glittering dance floor to the "Toxic" music video copycat outfit on Morris, the entire performance was the perfect throwback to Morris' days performing on Glee.

Not only did Morris channel Spears during her days of Glee, but she performed "Toxic" with the whole crew on the show on more than one occasion, so it was kind of a special song for the DWTS contestant on Vegas Night.

For Morris' "Toxic" tango dance with Alan Bersten, she received a combined score of 33 out of 40 and plenty of praise from all of the judges. Carrie Ann Inaba told Morris, "You brought the ballroom to Britney," while Len Goodman commented about how much he loved seeing actual tones of the tango dance in the routine while remaining uniquely their dance.

Before Monday's episode of DWTS, Morris wrote on her People blog that although she's performed Spears before, she was worried that fans would be tired of it by now. But, after some soul-searching and sister pep talks, Morris said that she realized her fans are her reason for being where she is right now and they're the ones who actually love all of her different Spears performances on Glee.

Since Morris' original partner on DWTS, Maks, was still out with a calf injury Monday night, she was left to perform again with Bersten, who she worked with for her Week 2 performance, which she said was "nerve wracking, but it felt awesome." And while we all love Maks, it's clear that Morris and Bersten work pretty amazingly together. As they glided across the floor in their matching glittering outfits, somehow doing a ballroom tango while moving fast enough to go along with "Toxic," they more than earned those high scores.