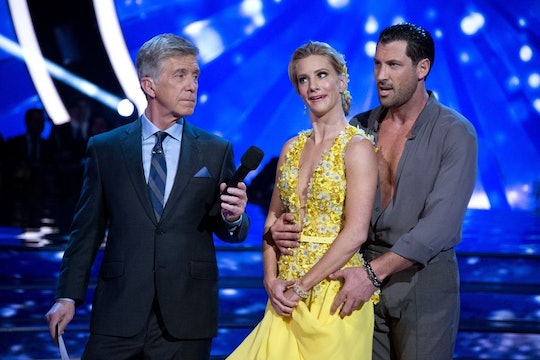 A 'DWTS' Injury Takes Maks Out Of Commission

First, Maks wasn’t going to compete on Season 24 of Dancing With the Stars since his wife Peta just gave birth to their son in January 2017. Then, he totally flipped the script and returned to pair up with Glee’s Heather Morris. But for Monday’s second episode of the season, things aren’t looking so good thanks to an injury obtained during rehearsals. So what happened to Maks on Dancing With the Stars?

A calf injury is going to keep him off his feet and, in turn, off the dance floor for Monday’s episode of DWTS, but for how long is really anyone’s guess right now. On Good Morning America, it was announced that the injury took place while rehearsing for Monday’s performance with Heather and sadly Maks won’t be able to perform because of it. Instead, one of the troupe members of DWTS, Alan Bersten, will step in to take his place as Heather’s partner.

Alan previously competed on So You Think You Can Dance and joined DWTS in 2015. He’s stepped in before for other pros like Gleb Savchenko and Mark Ballas, so he’s totally capable, but because of Maks’ injury, it’s kind of hard not to wonder how long the pro will be out of commission.

During Maks and Heather’s rehearsal for Monday’s Week 2 performance, Maks can be seen pulling away from Heather and exclaiming, “It's my calf muscle. F*ck. It just feels like something hit it." Obviously for safety reasons, it’s best to keep the pro sitting out for the time being, but there is still no word yet on whether it’s a muscle strain or something more serious that could keep him off the dance floor long-term this season.

The best case scenario is that Maks’s injury on DWTS is just a spasm, which can be treated with rest and massage to the affected area. Heather, who’s starred on Glee and toured with Beyoncé, is a trained dancer herself, and the hiccup in being placed with a brand new partner, if only for one week, probably won't deter her too much, but it’s the not knowing that’s probably worrying her and fans everywhere.

Overall, injuries to the dancers on DWTS aren’t all that rare and at least one tends to spring up each season. During Season 23, Jana Kramer tore some muscles in her rib cage and though she was advised to rest, she powered through her next performance. But it’s not always so easy and often taking the week off is best in order to be able to go on later in the season. Let’s just hope that such is the case with Maks and that he’s back to his physically competitive self after getting some much needed rest.