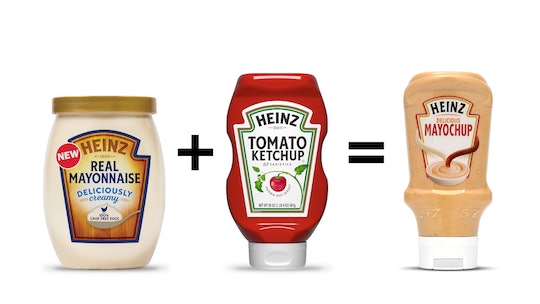 Apparently Mayochup Is A Thing The World Needs, & People Aren't Sure About It

There are many schools of thought as to what the perfect condiments are on a hot dog, hamburger, or sandwich. Some people like them plain, while others like just mustard, some like just ketchup, and others like just mayonnaise. And some folks? They actually like the combination of mayonnaise and ketchup mixed together. The Heinz company has created something especially for those people who love to mix — Heinz Mayochup. Heinz Mayochup could be coming to the U.S., but the company needs your help to make it happen.

You may be wondering what the hell Mayochup is, and it’s basically what it sounds like — a combo of Heinz Ketchup and Heinz Real Mayonnaise. Sound like the perfect combination of condiments, especially since summer is almost here? You’re not alone, as it’s already blowing up in the Middle East, according to a Heinz press release.

What may seem like the lazy man’s way of simply combining ketchup and mayonnaise, it could be much more than that, as Heinz has perfected the just-right blend of each ketchup and mayonnaise — the perfect ratio, if you will. However, according to the Daily Mail UK, there have already been some mixed reviews about the new condiment combo coming to the U.S. and the U.K. Some folks on Twitter have said Mayochup is “simply rebranded classic Marie Rose sauce.” Marie Rose sauce is essentially “cocktail sauce” that you dip your seafood into. Others have mentioned this combination is simply called “fry sauce” in many parts of the U.S., as that's what a lot of people apparently already do when they order fries — combine ketchup and mayonnaise. I prefer combining ketchup and mustard myself, but what do I know?

However, I’m not sure the people posting about it on social media have actually physically tried it yet, so the jury could still be out. Wouldn’t this combo go great on a burger, hot dog, or fries at your summer cookouts this year? Plus, Heinz takes the guesswork out for you of what constitutes the perfect mayo to ketchup ratio. Lazy or not, I’m intrigued. And this seems like an easy way to get some "fancy sauce." (Go watch Stepbrothers and thank me later.)

So what makes this new Heinz Real Mayonnaise “deliciously real”? Was it fake before? Apparently it’s made with all new, “high-quality ingredients, like 100 percent cage free eggs,” and it’s “crafted to taste like homemade,” according to the Heinz press release.

So here’s where your help comes in to ensure Mayochup gets to the U.S. Heinz is asking for 500,000 votes saying “yes” to bringing this Mayochup concoction to the U.S. Do you want to see this new condiment combo in your local grocery stores, or are you good with just making your own whenever you wish? But can you get that perfect ratio though? According to New York Daily News, of the voters so far on social media, “55 percent approve of the product, while 45 percent say they’d rather create their own Ketchup-Mayo mix.”

If you want to mix Heinz Ketchup with the new Heinz Real Mayonnaise on your own, you could totally do that as the new mayonnaise is available nationwide in 13-ounce and 19-ounce squeeze bottles (god bless those squeeze bottles, am I right?), and 15-ounce and 30-ounce jars. “The jars have been specially designed to look like an egg, reminding fans that 100 percent cage-free eggs are one of the key ingredients in our mayonnaise,” the press release noted.

Will Mayochup be on U.S. shelves along with Heinz ketchup, yellow mustard, barbecue sauce, baked beans and mayonnaise? You be the judge. Vote yes or no on Twitter.