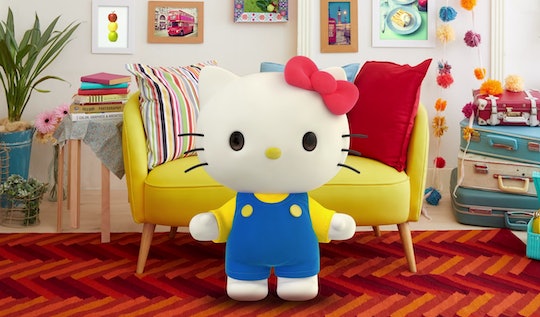 Hello Kitty Is Now On YouTube To Entertain & Inspire Your Kiddos

Hello Kitty is kind of like a Simpsons character — she's been around for decades, but hasn't aged a day. That being said, it's a little surprising that it took the perpetual third grader so long to start the first official Hello Kitty YouTube channel. Last week, an animated Hello Kitty kicked things off on her very own channel with an adorable intro video, announcing to the world that she was transitioning into life as a YouTuber, Refinery29 reported.

Just like a real YouTuber, Hello Kitty (who is a girl, not a cat, thankyouverymuch), addresses the camera in her intro video — and from a colorful, fabulously decorated room, to boot. "This is my debut as a YouTuber! Yeah!" Hello Kitty says in Japanese, according to the captions. "This is my first time, so I'm really nervous ... I was telling everyone at Sanrio that I wanted to go on YouTube like everybody else." Sanrio is the Japanese company that owns and licenses Hello Kitty (as well as many other kawaii characters, including Little Twin Stars, Kuromi, Keroppi, and Chococat), according to its website.

If your child is a Hello Kitty fan, they will absolutely love the video — even if they do not speak Japanese. Honestly, even if they are too young to read subtitles, they will probably still be entertained by Hello Kitty's adorable voice and the bright color palette in the clip.

Hello Kitty also explains that she had the idea to start a YouTube channel about a year ago, but Sanrio and her manager were, "like, tense," advising her that the internet was a dangerous place. But Hello Kitty says she persevered, because she didn't think she should be afraid to try new things, even if they seem scary. (I know that this is all fiction, but I'm totally buying into it and feeling ~inspired~. No shame.)

Considering Hello Kitty was created in 1974 (according to KawaiiSekai), and the fact that she already has Snapchat and Instagram accounts (as Refinery29 pointed out), she figured she'd better explain to her fans why it took so long to join YouTube. She even provided some tongue-in-cheek commentary about herself while doing so, telling the camera in Japanese:

Y'know, sometimes I google myself, and they say, "She'll do anything!" But it's not that I'll take any job at all, it's just that there's a lot I like to do. Doing all that I wanna do has made me what I am today. Doing everything I wanna do is like, the way I express myself. But I have a hard time explaining this to other people. I want everybody to know more about me and I wanna know more about everybody. I was trying to figure out how I could do this, and I realized, the answer was YouTube!

So, what can viewers expect to see on Hello Kitty's YouTube channel in the future? In the video, she drops a few hints that other Sanrio characters could be joining her at some point. "Don'tcha think it'd be fun to have my friends come over and appear on YouTube with me?" she says.

And as you may have noticed while watching the video, Hello Kitty somehow manages to speak with her signature absence of mouth, The Verge pointed out. Yup, Hello Kitty does not have a mouth, but she's not letting that get in the way of her vlogging dreams. And even though it's her first YouTube video, Hello Kitty already has the whole YouTuber thing down pat. As Kotaku noted, she asks viewers to subscribe. "Anyway, until next time — goodbye! Oops! Last, I'll say what YouTubers always say," she tells fans at the end of the video. "Don't forget to subscribe to my channel!" And honestly, if you're a fan of all things adorable, you probably won't regret clicking the subscribe button.