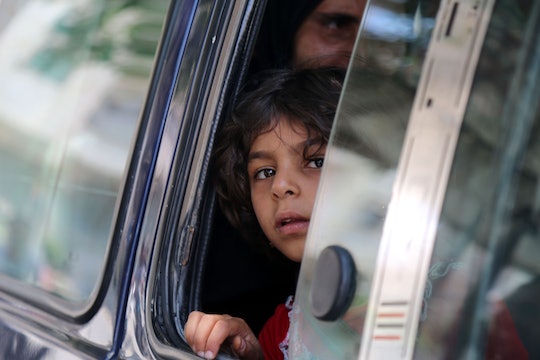 Helping The Children Of Syria Could Be Difficult For This Reason

A little boy in Aleppo, 5-year-old Omran Daqneesh, has become the poster boy for children suffering through the atrocities of war in Syria. A now-viral picture of him sitting in the back of an ambulance after he was rescued from the rubble of a bombed apartment building, covered in blood and soot and mud, dry-eyed and in shock, has shaken the world awake. But the world needs to remember that Omran is simply one of thousands of children suffering. And while people are finally seeing the damage that is being done and want to help the children of Syria, they might be in for a rough ride.

While cities like Aleppo continue to be torn apart by government forces on one side and rebel forces on the other (in the case of Aleppo, the government forces are attacking from the west while the rebels are in control of the eastern neighborhoods), no aid is available. Approximately 300,000 people are stranded in Aleppo,with an almost constant barrage of aerial attacks. According to Rescue.org, the situation is becoming more dire all the time.

“People are afraid. They always look to the sky, waiting for rockets or attacks,” a 26-year-old IRC aid worker from Aleppo told the organization. “When Syrians say goodbye to their families now, they know they might be saying it for the last time.”

The United Nations has reported that it has not been able to get one single humanitarian envoy through to the besieged areas of Syria since the fighting has started. There are approximately 8 million children in crisis in Syria, and they need to be rescued. The UN envoy needs there to be at least a 48-hour cessation of hostilities to deliver aid to the ravaged city of Aleppo.

Thankfully, it seems as though that cessation may finally happen, however cautiously workers are approaching the tenuous notion. On Thursday, Russia's Minister of Defense announced that it would support a 48-hour ceasefire in the coming days to allow medical evacuations and aid deliveries. So far, the Russian-supported Syrian army has cut off the main supply road into the city.

While the world anxiously awaits a possible ceasefire, how exactly can you help the children of Syria right now? There are a few ways available right now.

You can donate money to organizations like Unicef to help them deliver food, clean water, and health care when UN envoys are able to get to the children.

Pay attention to what's happening in Syria, not only when it is the "hot button topic," but for good — because we live in a world of distractions, and we just can't get distracted anymore.

Remember that time when people took to social media to make change with a few words and change happened? Yep, me too. The internet has given us all a voice, like it or not. And this time around, we can use our voices for the children of Syria.

They need us, and we simply cannot turn our backs on them.