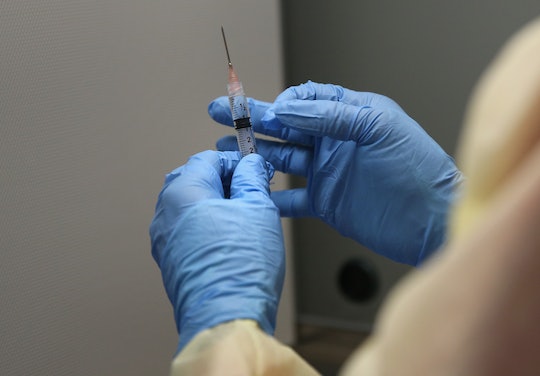 America has a lot on its plate in 2017. The president doesn't especially care to work with the rest of the world to combat climate change, debates are raging nationwide about the tumultuous future of the country's health care system, and some parents are opting not to get their kids vaccinated against preventable diseases. This last one might lead one to believe that there are still things that science can't tell us about vaccines to elucidate whether or not they're safe and vital. Except, you know, that's only the case, though, if you haven't been exposed to the cold, hard evidence that they are safe and vital, and that they work, too. Luckily for society at large, a little education should be enough to knock this iteration of the nation's health plight off the list.

It's east to believe that vaccines are still a scientific mystery with myriad scary risks if you're not looking at the right information. After all, actress Jenny McCarthy's belief that a rigorous vaccine schedule caused her son's autism is enough to frighten any diligent parent who simply wants what's best for their kids; The man who would go on to become the 45th president also previously propagated that myth.

If you choose to believe these (relatively uninformed) people, then you may start to believe that there are things about vaccines that we just don't know, such as...

Whether They Cause Autism In Kids

But here's the good news: We do know, definitively, that vaccines do not cause autism in kids. Scientific study after scientific study has consistently, rigorously debunked the assertion that there's a link between the two. One six-year study with the sole purpose of proving that vaccines do cause autism by analyzing the measles, mumps, and rubella (MMR) vaccine on different groups of monkeys ultimately concluded that it just wasn't true. Here's what the researchers ultimately found, despite their best efforts:

No behavioral changes were observed in the vaccinated animals, nor were there neuropathological changes in the cerebellum, hippocampus, or amygdala. This study does not support the hypothesis that thimerosal-containing vaccines and/or MMR vaccine play a role in the etiology of autism.

Although McCarthy once said that if you "ask a parent of an autistic child if they want the measles or the autism, we will stand in line for the [expletive] measles," the fact is that not immunizing a child will not protect him or her from autism. If a child was going to have autism and doesn't receive a measles vaccination, they're that much more likely to end up with both.

Whether They're Really Even Necessary

Although autism fears are pervasive in some circles, a 2016 study from the American College of Pediatrics found that's not actually the main reason that parents are opting to delay or forgo vaccines for their kids. The culprit is actually the perception that vaccines are not a crucial element of health care — and that's because the diseases that vaccines have all but eradicated aren't a common part of society, as they used to be. This ratchets down the fear factor.

"In the past, people were scared of polio and whooping cough, but parents aren't now because they don’t see it anymore," Dr. Lolita McDavid, medical director of child advocacy and protection at the University Hospitals Rainbow Babies & Children’s Hospital in Cleveland, Ohio, told ABC News. "It's a very uninformed way to approach a child’s health."

And when parents don't get their kids vaccinated, it puts all kid at risk because of what's called "herd immunity." According to Parents magazine, when less than about 80 to 90 percent of a population is properly vaccinated, outbreaks of long-forgotten illnesses like mumps and whooping cough can occur. That makes sense: It's because of how easily they can then spread in a setting like a school or daycare.

Whether Medical Professionals Have Ensured They're Safe

Crisis averted! The U.S. Food and Drug Administration (FDA) is fastidious about making 100 percent certain that vaccines are as safe as they can possibly be. According to the Centers for Disease Control and Prevention (CDC), the organization's "highly trained scientists and doctors" test vaccines for years before they're incorporated as part of a recommended vaccine schedule. They enforce strict manufacturing guidelines and continue to monitor vaccines once they're licensed, too.

Still unconvinced? VeryWell compiled a list of resources to equip parents with even more information you should definitely check out. Aside from showing the vaccines are critical, the resources prove that science can tell us pretty much everything we need to know about them.