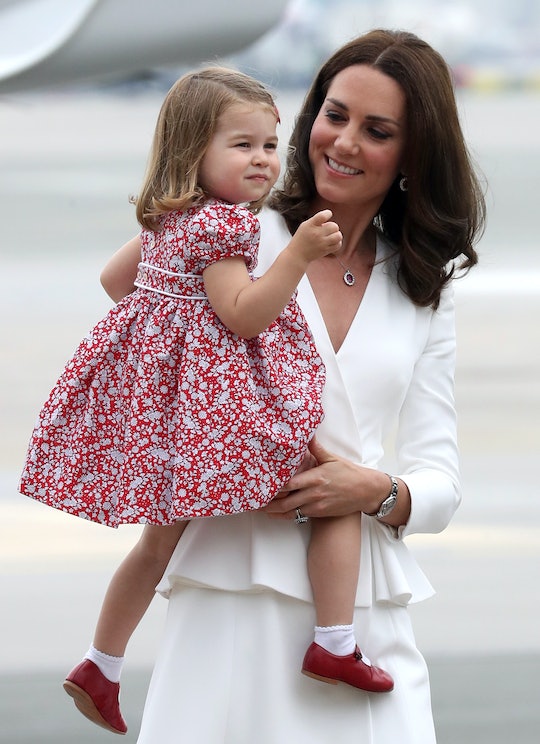 My favorite thing about the Duchess of Cambridge, other than her amazing wardrobe of tasteful fit-and-flare dresses, is the fact that I think she would be a great mom friend. The kind of mom who, yes, might look better at school drop-off time (which is generally a mark against you in my books), but would always sympathize with you as a parent. The kind of mom who would roll her eyes when you tell her about your son jamming a toy up his nose and say, "same." In preparation for the arrival of her third baby, let's recap Kate Middleton's realest mom moments with Prince George and Princess Charlotte, if only to lament the fact that she will never be our mom friend.

Middleton and her husband, Prince William, are parents to two of the cheekiest little monkeys in Great Britain, 4-year-old George and 2-year-old Charlotte. Much like children their age all over the world, these two tiny royals tend to throw little tantrums when they're tired and refuse to cooperate every once in awhile. Unlike other kids their age, their behavior is frequently on display for the rest of the world to see. And honestly? Watching a royal duchess crouch down in a dress and heels, whisper-yelling at her kid through clenched teeth, is evidence that sometimes parenting sucks for everyone. Even bonafide royalty.

Middleton is a real wunderkind when it comes to keeping a surprisingly natural-looking smile pasted on her face at all times. Whether she's been walking all day in heels, something all women know is almost never worth the pain, or trying to wrangle her children wearing an actual fascinator atop her royal head, it's a rare thing to see the duchess break character. But pay close attention to the vice-like grip she keeps on her kids if they're squirming. I suspect she's got some serious upper body strength.

One of my son's school friends once said I was a really nice mom "unless you do that thing with your eyebrows, and then you're mean." The truth is, every mom needs A Look. And Middleton has already perfected hers, probably in no small part thanks to the precocious little Princess Charlotte. Even Queen Elizabeth II has said this little girl rules the roost... although it looks like her mom has her towing the line quite nicely, thank you very much. Still, if a queen says you're a handful, you're probably a handful.

There's one area of parenting where I have to admit Middleton has bested many a mom out there: the crouch and scold. When one thinks that she might be expected to look nice and smile for the cameras plus have perfectly well-mannered children at all times, it's impressive to realize that Middleton holds it together as well as she does.

Case in point: her sister Pippa Middleton's 2017 wedding, when her small children were in the wedding party and Princess Charlotte wasn't into cooperating. She fixed that real quick, all because of her now infamous (in my opinion) crouch and scold method.

Both Middleton and her husband have made mental health awareness a priority in their lives, and Middleton has been open about struggling with self-doubt and loneliness as a mom at times. As she noted during a 2017 speech, according to ELLE:

Nothing can really prepare you for you the sheer overwhelming experience of what it means to become a mother. It is full of complex emotions of joy, exhaustion, love, and worry, all mixed together. Your fundamental identity changes overnight. You go from thinking of yourself as primarily an individual, to suddenly being a mother, first and foremost. And yet there is no rule book, no right or wrong—you just have to make it up and do the very best you can to care for your family. For many mothers, myself included, this can, at times lead to lack of confidence and feelings of ignorance.

It's this sort of self-awareness, this vulnerability Middleton is generous enough to share with the general public, that makes her an ideal candidate for best mom friend ever. Because she just gets it, you know? She's real, in a world that has not always encouraged royalty to appear real (I watch The Crown, so I totally know what I'm talking about).

I can't wait to see Middleton with her third child. I mean, if we ever catch her rolling her eyes, I'm going to be able to die happy.