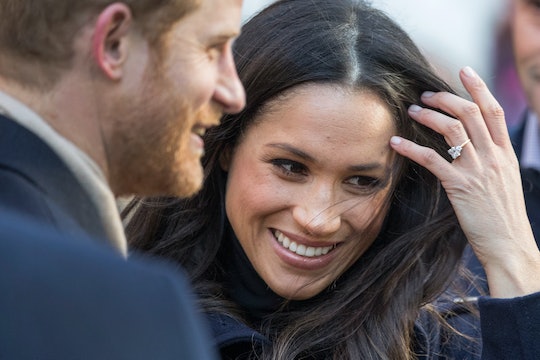 Here Is Everything You Need To Know About Meghan Markle's Parents

It's finally happened, the stuff of our Disney movie dreams. There is actually going to be a real American princess. OK, we don't know *for sure* if American actress Meghan Markle is going to be called Princess Meghan, but she's marrying a prince so... yeah, it's happening. Now that Prince Harry and Markle have made things official, the whole world is caught up in Markle fever. Fans want to know everything there is to know about her; like who are Meghan Markle's parents? How did she grow up? Where did she get those jeans? You know, all the important stuff.

The former Suits actress has introduced both of her parents to Prince Harry. In fact, the prince reportedly asked Markle's parents for their permission before proposing to his new fiancee. According to Us Magazine, Clarence House issued a statement after Prince Harry's low-key, romantic proposal to Markle confirming that the prince "sought and received the blessing of Ms. Markle's parents." Because obviously, you're probably going to be pretty happy if your daughter is marrying a prince, but perhaps most especially a philanthropic, charming, kind prince like Prince Harry. So what do we know about Markle's parents, Doria Ragland and Thomas Markle?

Markle's parents have been divorced since she was 5-years-old, and she was raised in Los Angeles with her mom. Doria Ragland is reportedly a yoga-loving social worker and Markle has credited her over the years with inspiring her to take on the practice herself. Mother and daughter remain very close; in a 2017 article with Glamour, Markle said her mother was one of the top 10 women who influenced her:

My mom's a yoga instructor, but she does social work, as well, and she works specifically with the geriatric community. For me to watch this level of life-long sensitivity to nurturing and caregiving, but at the same time my mom has always been a free spirit. She's got dread locks and a nose ring. She just ran the LA Marathon. We can just have so much fun together, and yet, I'll still find so much solace in her support. That duality coexists the same way it would in a best friend.

Prince Harry first met Markle's mom at the Invictus Games in Toronto, Canada earlier this year (which is where he reportedly asked Ragland for her permission to marry her daughter, according to Us... and now I'm dead). Harry said during the couple's first joint interview with the BBC that Markle's mom is "amazing," and that he truly believes Markle and his own mother, the late Princess Diana, would have been "as thick as thieves" if she had lived.

Markle's father Thomas was actually one of the reasons she reportedly became an actress; he is a cinematographer and lighting designer who worked on shows like Married... With Children and The Facts Of Life. Thomas Markle also has another daughter, Samantha Grant, and a son, Thomas Markle Jr, from a previous relationship. Markle's dad met Harry during one of his visits to Canada, and was happy to offer his blessing for the couple's engagement along with Markle's mom in an official joint statement via Clarence House on Monday:

We are incredibly happy for Meghan and Harry. Our daughter has always been a kind and loving person. To see her union with Harry, who shares the same qualities, is a source of great joy for us as parents. We wish them a lifetime of happiness and are very excited for their future together.

Meghan Markle and Prince Harry are slated to be married on Memorial Day weekend in 2018. Both of her parents are sure to be in attendance.