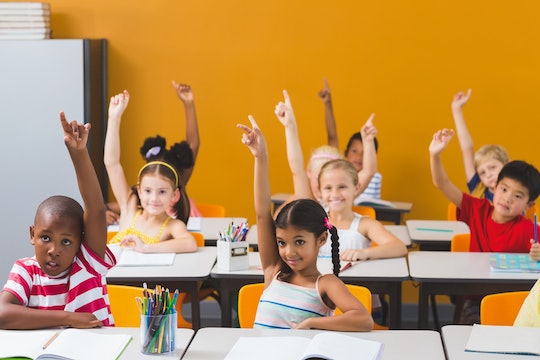 Most adults I know have at least some rudimentary understanding of how depression can affect our live. It's different for everyone, but depression can affect the way we interact with people, decrease our performance and confidence at work, and color the way we see the world in general. But what about kids who are struggling with depression? As adults I think we tend to see their lives as less complicated and easier to navigate, but depression affects your kids' skills at school in ways that might come as something of a surprise to you.

More Like This
Does Your Babysitter Need To Wear A Mask? Here's What The Experts Say
The Best Dehumidifiers For Every Space In Your Home
How To Properly Clean An Inflatable Pool
New Report Finds A Known Carcinogen In Popular Sunscreens

A recent study out of the University of Missouri-Columbia looked at children in the second and third grade who exhibited signs of depression to see how it might change their skill set at school. When students are in these pivotal grades, they generally have to absorb a whole lot of new information that will work as building blocks for their future education. According to Parents, these are the grades when kids solidify their reading and writing skills and move forward with language comprehension, take on basic math like addition and subtraction, and learn how to tell time. In other words, really important skills they will be using throughout the rest of their lives. And there's a strong possibility that depression will impede kids while they're trying to learn.

One of the difficulties that comes with looking at children who are so young is trying to identify whether or not they are experiencing symptoms of depression, according to study co-author Keith Herman. When he and education professor Wendy Reinke worked with researchers to evaluate 643 second and third grade students, a key element was trying to gauge whether or not parents, teachers, and the student themselves saw depression symptoms. As Herman told Science Daily:

When you ask teachers and parents to rate a child's level of depression, there is usually only about 5-10 percent overlap in their ratings. For example, the teacher might report that a child has difficulties making friends in class, but the parent might not notice this issue at home. Some people would view that overlap as the truth about a child's well-being and areas of disagreement as errors, but we need to explore the possibility that they each are seeing different aspects of children's behavior and mental health.

This is an important distinction to make; Herman noted in his research that children who exhibited severe symptoms of depression were six times more likely to have trouble with their schoolwork than their peers. Another sobering statistic; 30 percent of students in the study said they felt mildly or severely depressed. And those were the students who were able to self-identify, as Herman explained to Psych Central:

However, even if a child doesn’t say they feel depressed, certain outward behaviors might provide clues to the state of the child’s mental health. It’s important for teachers and parents to catch these behaviors early to prevent long-term problems that occur with depression.

There could also be physical symptoms like loss or change of appetite, different sleeping patterns, and lots of stomach aches and headaches. As many as 2 to 3 percent of children in this age group could have major depressive disorder, according to the Anxiety and Depression Association of America. If you are concerned that your child might be struggling with depression, contact a mental health worker for more information on how to help.