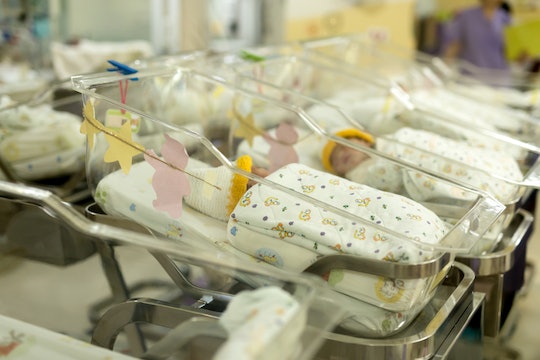 Climate change apparently affects more on this planet than some of us might have initially understood. While I believe most of us have some inkling of how global warming is changing the way our world works in very serious, dangerous ways, I doubt many understood that it also changes human biology. I know I certainly didn't know this. Well, according to a new study climate change has a distinct effect on a baby's sex.

Scientists at the M&K Health Institute in Hyogo, Japan recently shared the results of a study they were working on about whether or not climate change can alter the ratio of boys and girls born. The researchers found that fluctuating temperatures and a warming planet does, indeed, have an affect on the number of boys to girls born; in fact, they found that fewer boys are being born in comparison to girls as climate change continues to change our planet. Why? According to Dr. Misao Fukuda, lead author of the study, conception of boys were found to be more affected by the external stress of a changing climate than girls. Fukuda explained in an email to CNN that scientists can't yet pinpoint why exactly an external stresser like climate change could potentially affect the sex of a baby. But he theorized that the "subtle changes in sex ratios" could have something to do with the vulnerability of the Y sperm cells and male embryos in utero.

This study appears to confirm a 2018 study performed by Fukuda and his team of researchers that looked at the ratio of boys and girls born after a natural disaster, like the Kobe earthquake of 1995, the Great East Japan Earthquake of 2011, and the 2016 earthquakes as well. Researchers looked at babies born nine months after each disaster and found that the number of boys born dropped in each case, from six percent in some cases to as high as a 14 percent decline in others.

The ratio of boys born can also be attributed to the temperature, as noted by University of California professor Ray Catalano. He noted that worldwide, there tend to be more baby boys born than baby girls by a slight margin (103 boys born for every 100 females born), but that more boys tend to be born when in warmer climates without external climate change factors like drought or wildfire. Catalano also noted that, in a study of birth trends in Scandinavian countries from 1878 to 1914, fewer boys were born during especially cold winters.

As he told CNN:

Humans are clearly going to have to learn to adapt as our actual biology is affected by climate change.

Or we could just go ahead and try to stop climate change. It's not really an either/or situation.