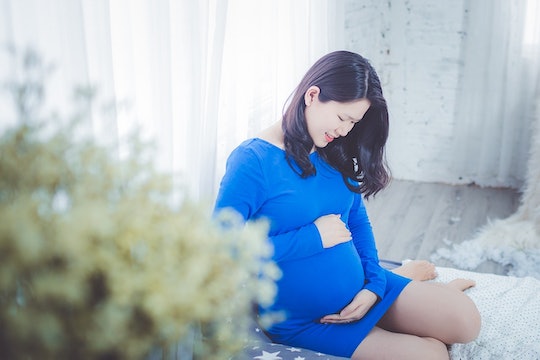 Here’s How Much Arsenic Is Safe During Pregnancy, According To Science

With the recent scare of arsenic levels found in baby formula, a lot of moms are questioning the effects of the metalloid in general. Especially for moms-to-be, knowing just how much arsenic is safe during pregnancy, according to science, studies, and other experts is key to keeping you and your baby safe. According to March of Dimes, arsenic is a metal that comes from natural sources, like rocks and forest fires, but also hails from man-made sources, like the creation of electronics and mining. Additionally, the U.S. Food and Drug Administration (FDA) shared something note-worthy about how arsenic gets into your food:

"Arsenic is an element in the Earth’s crust and is present in very small amounts in water, soil and air. Crops absorb arsenic as they grow. That’s how it gets into foods and beverages — it’s not an additive or ingredient — and it cannot be completely eliminated."

Unfortunately, because clear guidelines have yet to be established — Life Science reports that the Environmental Protection Agency (EPA) limits arsenic levels in drinking water to 10 parts per billion, but there's no limit for arsenic in food — knowing how much is "safe" and what you should or should not eat isn't such an easy question to answer. Your best bet is to err on the side of caution. Parents suggests limiting your intake of anything strongly associated with arsenic to one serving a day (rice especially). If you think your water line is questionable, you can also cutback on foods that are exposed to crops irrigated with contaminated water and food prepared with contaminated water which are sources of exposure, according to the World Health Organization (WHO) like grape and apple juice, rice, fish, shellfish, meat, poultry, dairy products, and cereals. This sounds a bit extreme and before you start adding even more items to your can't-eat list, let's first get into the risks and the precautions to take.

So what's the harm? Smaller amounts of arsenic found naturally in your environment and foods, as described above, aren't likely to harm you, coming into contact with higher concentrations of arsenic causes problems like miscarriage and birth defects. The FDA has done an analysis of the scientific studies that show a link between adverse pregnancy outcomes and intake of high levels of inorganic arsenic during pregnancy. Their findings may shock you.

It turns out the FDA uncovered that "exposure may result in a child’s decreased performance on certain developmental tests that measure learning." Even though the EPA limits arsenic levels in drinking water to 10 parts per billion, research showed that "pregnant and lactating mice who drank water with 10 parts per billion (ppb) of arsenic had disruptions in their fat metabolism, leading to a reduction of nutrients in the mice’s blood and breast milk," according to Live Science, which is still worrisome for moms to be.

So with the safe amount of arsenic still seeming somewhat questionable, it's a good idea to take steps in reducing your exposure to arsenic all around. The WHO suggested substituting high-arsenic sources, like groundwater, with low-arsenic sources such as rain water and treated surface water. Additionally, use low-arsenic water for drinking, cooking, and irrigation, while high-arsenic water is better for bathing or laundry. March of Dimes suggests using gloves to garden or handle soil and getting your tap water tested for arsenic for peace of mind before drinking it during pregnancy.

You can check the public tap water base for a list of contaminants (both in general and above health guidelines) here. You can also test your tap or well water yourself by using an arsenic test kit, or there are even filtration systems that will help filter out arsenic. These are some of the top filtrations systems shared by FitLife.tv.

Unless you're in an environment or workplace that's exposed to high levels of arsenic, you probably don't need to be on high alert all the time. Although it's important to remember the effects that are being uncovered about arsenic exposure, you can make small changes like eating a balanced diet along with limiting the aforementioned foods and types of drinking water to eliminate your everyday arsenic sources.

Additionally, keep in mind that the two largest areas of concern currently are tap water and rice and adjust accordingly. A Consumer Reports study also shared that 10% of juice samples, from grape and apple juice, had arsenic levels that exceeded federal drinking-water standards. Parents further suggested limiting servings from items with higher arsenic levels, like certain juice brands, waters, and rice, to once a day to be on the safe side.

More Like This
How To Increase Your Sex Drive While Pregnant
Here's How To Keep Your C-Section Incision Dry
New Report Shows 80% Of Pregnancy-Related Deaths Are Preventable
What Does Amniotic Fluid Smell Like? A Nurse Explains