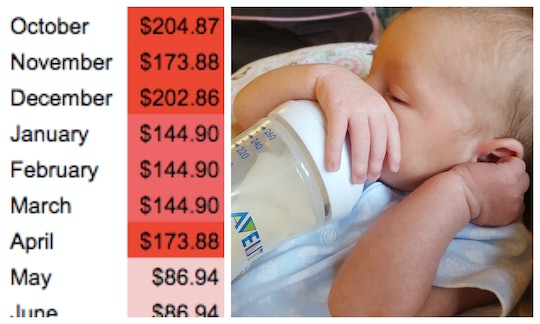 When I was about to give birth to my second kid, I convinced myself that breastfeeding would work out better the second time around; because truly, it couldn’t have gone any worse with my first. I had gotten so wrapped up in “breast is best” the first time that I could hardly enjoy my newborn daughter. I was obsessed with trying to breastfeed despite a low supply and a baby who didn’t seem at all interested. I pumped, I supplemented with formula, I drank the Mother’s Milk tea, I tried to nurse over and over until I was in a legit postpartum depression haze. But with my second, it would be different! Riiiiigghht?? Not really. Which is how I ended up the costly process of formula feeding my child for the first year of his life.

My supply was still pretty abysmal the second time around, despite my using a hospital grade pump and doing all the other stuff you’re supposed to do. The main difference was that I chose to be less stressed about it, and that did me a world of good. At the recommendation of the lactation consultant at the hospital, we started supplementing with formula on day 2 of our newborn son’s life because I just wasn’t making enough colostrum.

The hospital offered those mini bottles of formula in two brands, and we chose the one we’d had success with for our daughter. The hospital used a specific type of a major brand which we liked and wound up sticking with for the year, not yet knowing it would be harder to come by than your average formula.

We got a few free bottles when we left the hospital, but nurses don’t hand formula out like they do Tucks pads, so we needed to make a jaunt to the pharmacy stat. I sent my husband in search of the pre-mixed 2-ounce bottles, even though they are much more expensive than powdered formula, because I just couldn’t handle measuring and mixing yet. I promised my husband I would get there soon, but while the baby was only eating 1-1.5 ounces of formula at each feed, it seemed crazy not to take advantage of the super convenient pre-mixed bottles (that’s how I rationalized it anyway). He couldn’t find them at our usual drug store, but he found them at a CVS in the next town over, which we’d later find out was the only pharmacy that carried our brand. He bought two packs of eight bottles for $8.79 each.

Of course, those only lasted two days, because the baby was eating eight or nine times a day, and once you open one of those bottles, it’s not like you can save what’s left; you have to throw it out after an hour even if the baby hasn’t finished it because… contamination? We weren’t exactly sure why, but we wanted to follow the rules. So, it was back to the pharmacy for more of the pre-mixed bottles.

Meanwhile, I pumped for about a month and gave the baby what breast milk I could, but it was never more than an ounce or two a day. I knew we were in for the long haul with formula — again.

After the first week, I was able to grasp the impracticality of spending so much money on tiny pre-made formula bottles; not to mention the baby was starting to drink two to three ounces at each feed, rendering the 2-ounce bottles kind of useless. We found the formula we liked in powder form online and set up a subscription to get it monthly along with diapers and other essentials because I’d heard you get the best deal that way. It costs $28.98 for one tub, which is a couple of bucks less than what you can find it for in drug stores. We’d already picked up one tub at CVS for $30.99, and we ordered three more tubs for the remainder of the month, and four tubs for the next month.

Whew, the cost of formula is no joke. And of course, as the baby started eating more (he was up to 30 ounces a day by 3 months old), we had to up the amount we bought. Anywhere from five to seven tubs per month turned out to work pretty well, but I couldn’t always anticipate the right amount to buy, so there were a few months where our supply was running short and I had to race to CVS to get more.

Now that my son is almost 11 months old, we’re approaching the end of the line with formula and have just placed what I’m assuming (hoping?) will be our final formula order. As of two months ago, our online subscription site no longer offers our brand, so we’ve had to buy it in bulk elsewhere online every few weeks. The last time I ordered though, there was a limit on how many boxes you could get, so I had to order from a couple of different retailers. I’m not sure what the deal is with this brand of formula, and why it’s harder to come by than others; I’m just glad that this didn’t happen several months ago because again, there’s only one pharmacy near us that sells it.

I could honestly start to hyperventilate as I tally up the amount of money we spent on formula; but honestly, what choice did we have? Two hundred years ago, I would have just passed the baby over to a lactating friend or relative to keep him alive. Not that there’s anything wrong with that, but it’s not an option in this day and age, so I’m truly thankful that formula exists for women like me. I really wanted to breastfeed, and I tried my hardest to make it work with both my kids, but to no avail. I guess the penalty for having a low milk supply is spending almost $2,000 for the year on formula! But the trade-off is that your partner can split the night feeds with you (and the day feeds, for that matter); and that, my friends, is priceless.

If you would like to submit your story of extreme spending — or extreme savvy — as a parent to Expense Report, email janet.manley@bustle.com.

More Like This
When Does A Baby Recognize Their Father? A Pediatrician Explains
Paris Hilton Is Officially A First-Time Mom
40 Valentine's Day Outfits Your Girls Will Adore Showing Off This Season
13 Aquarius Baby Traits & How To Support Your Little Water Sign
What Parents Are Talking About — Delivered Straight To Your Inbox