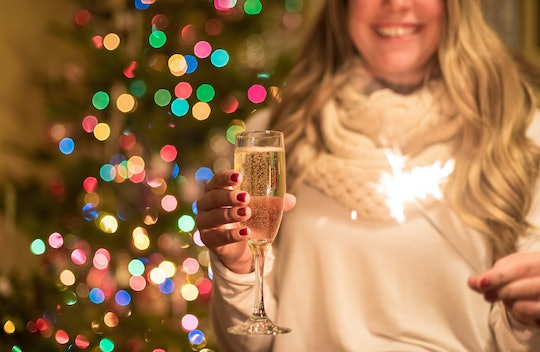 You're a new mom, which means you've been doing hard work since your baby's arrival. For a lot of new mothers, this also means you've been breastfeeding. Now, it's coming up on New Year's Eve, you've somehow managed to get a babysitter and a reservation at the chillest party in town, and you'd love nothing more than to share quiet conversation and some drinks with your friends. However, you're worried about your breast milk. Is it safe to drink and nurse? If you're wondering, here's how much you can actually drink on New Year's Eve if you're breastfeeding.

The research has been all over on this subject lately. For years, we only had data about drinking during pregnancy, and drinking while breastfeeding was just an afterthought. Alternatively, old wives' tales encouraged breastfeeding mothers to drink dark beer to increase their milk supply and to relax their efforts. The evidence has been wishy-washy at best. Now, recent scholarship has argued that even if a mother is drinking fairly heavily — about four drinks in a period of an evening — only a nominal amount of alcohol, not even enough to be clinically relevant, makes it to the baby. Although, the American Academy of Pediatrics (AAP) still stands by their recommendation to no more than 0.5 grams of alcohol per kilogram of body weight in an evening, and to wait two hours after imbibing to feed or pump.

The AAP's caution makes a lot of sense. Even with buckets of research into the dangers of drinking while pregnant, there have only been a few handfuls of studies completed on the dangers of drinking while breastfeeding, and because the research is so tricky to complete — both ethically and honestly — many of these studies are basing their research on other completed studies. Studies can be flawed — that's why there's such a rigorous peer-review process. Even after that, there are simply many factors that can shift the outcomes that the researchers hadn't thought of when designing the study.

Websites like Kelly Mom and La Leche League tend toward caution as well, but with slightly looser restrictions. Their basic premise is "if you're sober enough to drive, you're sober enough to breastfeed." This is a fairly easy standard by which to judge your drinking for the night. I know that for me, a 150-pound woman who stands 6 feet tall, this is about 6 ounces of wine in a little over an hour. Any more than that, I'd be impaired.

Strangely enough, an Australian study found that the majority of the population of women who drink while breastfeeding are older, highly educated, and have a mean income of over $2,000 per week. They attribute the consumption of alcohol to this group as a combination of affordability, access, and assumption of consumption based on peer group. (A sort of "let's get drinks and talk this plan over," mentality.) The study found that even the babies of mothers who drank more than 14 drinks per week while breastfeeding did not see any adverse outcomes. However, they hypothesize that this has as much to do with the community most likely to drink that amount as it does anything else. It's a sad and simple fact that babies born to affluent mothers have a better shot at being breastfed for longer and performing better.

Alas, this fails to answer the question of how much you can actually drink during New Year's Eve if you're breastfeeding. While the recent literature indicates that you could probably get away with a lot more than what we've thought previously, until more studies say the same thing, it's best to go with the recommendations of the experts of the La Leche League and other outlets who suggest the "drinking/driving/breastfeeding" model. If you're sober enough to drive or operate heavy machinery, you're sober enough to breastfeed. So, about a drink per hour with food. Remember, pumping and dumping isn't a thing. Your breast milk is much like your blood in that alcohol is either there or it isn't, according to Kelly Mom. Pumping won't sober up your boobs via external mechanism. Drink responsibly and have a safe, healthy new year.