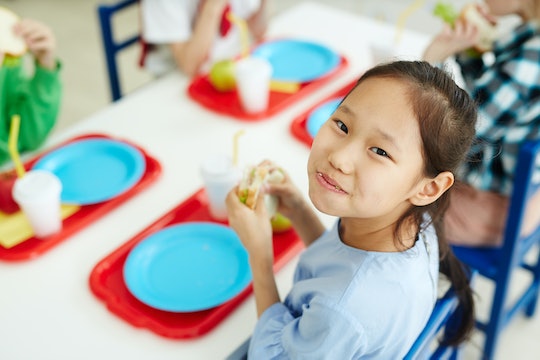 The federal government remains in a massive shutdown, the longest in history actually. For the past 28 days, 800,000 federal workers have been furloughed or in some cases forced to work without getting paid. All because President Trump wants the government to foot the bill for the $5.7 billion wall between the United States and Mexico, a campaign promise of his that apparently means more than taking care of the people living and working in this country. The shutdown has filtered into everyone's lives, even our kids. Here's how the government shutdown is affecting kids' school lunches, because not even the little ones can get away without bearing some of the brunt of this ridiculous shutdown.

It seems some areas of the country are having to pull back some of their school lunches to a minimum amount, thanks to the government shutdown. In Vance County, North Carolina, the school district shared the news on Wednesday that they have been forced to conserve resources because of the shutdown. As per the Facebook post from the school district, "no fresh produce" will be included in school lunches as of Jan. 21, unless an elementary school is part of the Fresh Fruit and Vegetable Program and that would go down to two days per week.

Vance County also noted that no bottled beverages, water or juice, would be available once those in stock have been used up. And perhaps saddest for the kids themselves... no more ice cream. As the Facebook post noted:

The Vance County Schools Nutrition Program for students is self-supporting with federal funds providing meals. We hope that normal lunch menus can be resumed as soon as possible once the shutdown has ended.

While there were some people who didn't seem terribly concerned about the loss of fresh produce in the school lunches, there were plenty who argued that there might be less fortunate children who use that mean as their only nutritious meal of the day. And this isn't only happening in North Carolina; according to KUTV, Utah Governor’s Office of Management and Budget executive director Kristen Cox has said the state is "weeks away" from running out of funds for school lunches as well. With the government shutdown showing no clear sign of ending, this is bound to get worse as time goes on.

School lunches are another casualty in Trump's bid to force the Democrats hand in paying for the expensive border wall between the United States and Mexico. Federal employees trying to get by without being paid, long line-ups at airport security, small businesses feeling the pressure, farmers who can't apply for important loans to help them with their crops... the list goes on and on. And now it looks as though more kids will be going without healthy school lunches through the lunch program. Which probably doesn't seem like a problem to Trump since he loves fast food so much, but to others?

It just feels like a lot to pay for a promise he maybe shouldn't have made.