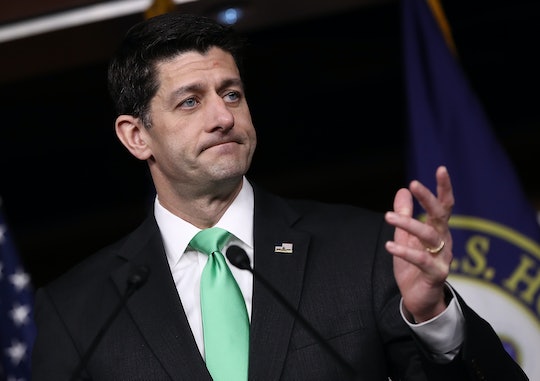 On Thursday, as the House prepares to vote on the American Health Care Act — the GOP's replacement for "Obamacare" — alarming last-minute revisions to the bill have come to light as Republican leadership scrambles to placate their most conservative colleagues. House Speaker Paul Ryan worked with lawmakers late into Monday night to tack on what's been dubbed the "manager's amendment," an especially more conservative set of regulations than previously found in the health care bill — and it's a doozy for new moms. As damaging as the AHCA is to women in general, here's how the newest revision to the health care bill targets mothers specifically.

A large chunk of the "manager's amendment" — submitted by Ryan only three days before the bill is set to come to a vote — contains even further cuts to Medicaid, the government welfare program that has already taken a beating in the GOP's "we've had eight years to come up with a replacement and this is the best we could pull off" version of health care reform. Specifically, the new ACHA amendment requires that moms on Medicaid must find a job within 60 days of giving birth — or lose their Medicaid coverage.

No, this is not the first chapter of some Margeret Atwood-esque dystopia: This is just the House playing hardball to secure the 216 votes it needs to pass this sh*tshow of a bill to the Senate. And to be perfectly candid, it's a new low, even for Republicans. It's no secret that the GOP wants welfare reform: It's part of their platform. But these Medicaid reforms come at the expense of the people who need Medicaid the most — and singling out new mothers seems especially cruel.

Medicaid covers nearly half of all births in the United States, according to the Medicaid website. In 2014, the CDC reported there were almost 4 million births, which means Medicaid potentially covers as many as 2 million births each year. Medicaid provides vital services to new mothers, from postpartum depression screenings to home visits following birth. A 2010 study found that low-income women suffer from postpartum depression more than other mothers.

Consider the scenario this new amendment to the ACHA creates: In addition to the swirling insanity of post-pregnancy hormones, the zombie-like state that is caring for a newborn, a jobless new mom on Medicaid who is most likely worrying about how to feed the rest of her family now faces the added pressure of making sure she gets a job as soon as she can — or else her entire family loses their health care coverage. Seriously, Paul Ryan — what the hell? Tell me again how Trumpcare is going to actually help Americans?

The House is expected to vote Thursday on the ACHA, inclusive of Ryan's new — and unnecessarily punitive — amendment targeting moms on Medicaid.

More Like This
What Parents Need To Know After DEA Issues Warning About "Rainbow Fentanyl"
New Report Shows 80% Of Pregnancy-Related Deaths Are Preventable
Mental Health Stories Are Family Stories
How Much Hair Loss Is Normal? 9 Signs You’re Losing Too Much Hair