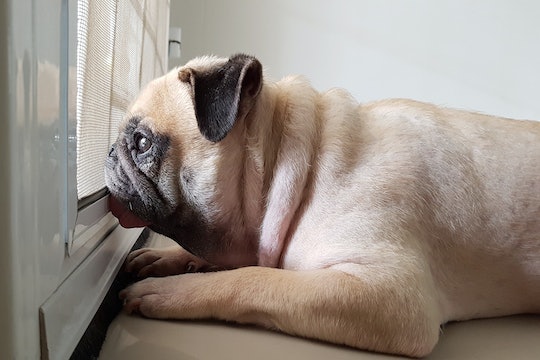 When Your Kids Go Back To School, It Apparently Really Affects Your Dog

My household has returned to the back-to-school routine: I get up and dressed, shake awake whichever child has overslept, and go through the familiar nag-and-pack-and-nag-and-feed-and-nag drill until we all scurry out the door. In the meantime, our cat sits and watches us with a slightly amused expression on her face. But at the same time, I can hear the barking of dogs in the nearby apartments and houses as other families get ready for the day, and I wonder: What do dogs think when kids go to school?

We've all seen tons of pictures and videos of dogs who display their love and loyalty to their human companions. Some of the videos show dogs who apparently don't want their kids to leave for the school bus: They jump on the kids, chase the bus, whine, and pace. Then, when class lets out and the children come home, the devoted pooches greet them as though they'd been gone for five years without so much as a call or text.

But do our dogs really miss us when we're gone? Behaviorists wonder the same thing. And at least one, Emory University psychology and neuroeconomics professor Gregory S. Berns, M.D., Ph.D., has been doing research to find out exactly what goes on in a dog's brain. After figuring out how to get dogs to lie still in an MRI, he tested dogs' brain responses to the smells of familiar and unfamiliar people, familiar and unfamiliar dogs, and to their own scent. Sure enough, the reward center of pups' brains reacted most strongly to the smell of people they knew. "We found that their brains are so much more responsive when the information comes from a human," Berns wrote in Psychology Today.

What's more, dogs apparently can tell the difference between shorter and longer periods of separation from their favorite people. A Swedish study published in the Applied Animal Behaviour Science journal followed the responses of twelve dogs whose owners left them home alone: first for half an hour, then two hours, and then four hours. The dogs showed stronger reactions to the longer separations — increased heart rate, fast tail-wagging, lip-licking, and interactions with their owners — than they did when left alone for just 30 minutes. There was no noticeable difference between their reactions at the two- and four-hour periods, however.

Behaviorists have also found that dogs can think at the level of a 3- to 5-year-old child, according to PetMD. They can make basic associations, sense danger, and understand routines. So your dog knows what it means when your kids put on their backpacks, and can anticipate that long period of being apart. During school hours, your pet may wander into your kids' rooms or sit by the front door to await their return. Then when the children come home, the familiar crayon-and-dirty-sneaker smell triggers the dog's excited reaction.

Banfield Pet Hospital explained that the separation can be particularly difficult for dogs in the first few weeks of school, after a whole carefree summer of romping in the yard or playing in the park. The change in routine and the absence of their young friends can make a dog depressed or even overly anxious.

Experts have helpful suggestions to help your pet conquer the blues when your child is away. If your dog was used to a lot of playtime during the summer, then taking long walks during school hours can help, Oregon psychologist Mary Lee Nitschke told NBC News. Letting your pooch cuddle with a worn piece of your child's clothing can also provide comfort and avoid destructive stress-related behaviors, such as tearing apart the garbage or chewing on shoes.

With time, your dog should get used to the school-day routine, even if they don't quite understand what your kids are doing when they're gone. But if your pet exhibits signs of real separation anxiety, such as excessive howling, drooling, soiling indoors, or self-harm, see your vet. In the meantime, keep in mind that to Fido, the whole back-to-school transition does not go unnoticed.

More Like This
16 After-School Snacks For Hangry Kids
What Is RSV?
The Best Halloween Family Pajamas To Match Your Boos
Tips For Apple Picking With Kids