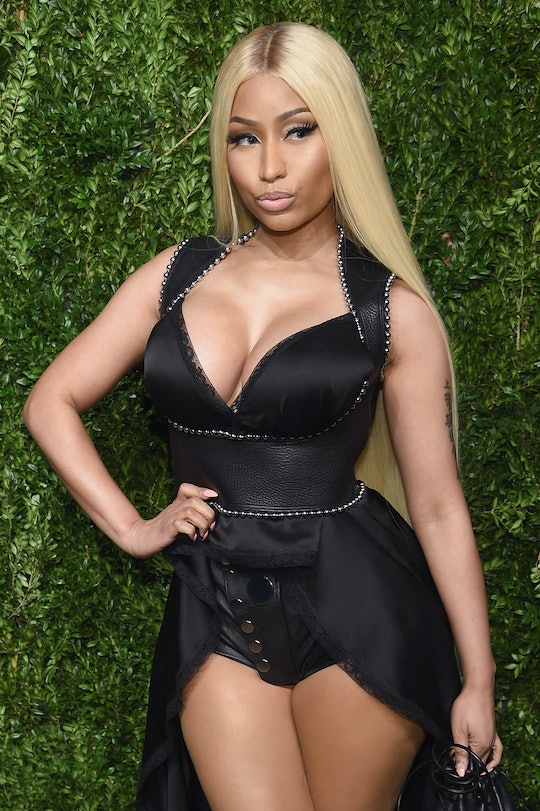 Nicki Minaj fans quickly jumped on unverified reports that the "Super Bass" singer is pregnant in hopes they were true, but there have been plenty of reasons to question them. And, as it turns out, now there's more "evidence" to debunk those Nicki Minaj's pregnancy rumors. TMZ reported on Thursday that there really is no truth to the reports that Minaj is having a baby with rapper Nas, as many fans were led to believe earlier this week.

Originally, Media Takeout reported that Minaj allegedly learned that she was pregnant around Thanksgiving and she was going to announce the alleged news when the Grammy Awards take place later this month. Media Takeout reported that Minaj has been quiet on her social media due to her alleged pregnancy. But if they haven't noticed, Minaj has been actively promoting Lil' Wayne's new mixtape on her Instagram account, so that's not really a valid form of "proof." Along with citing an unnamed "insider", this kind of "evidence" is one of the reasons why Minaj's pregnancy rumors are absurd. Romper's request for comment from Minaj's rep has not yet been returned.

On Thursday, TMZ reported that Minaj is "definitely not pregnant" and that she and Nas are said to have called it quits a few weeks ago. The reason for their reported breakup had to do with geography, according to TMZ. Minaj and Nas first started dating in June 2017, but have known each other for years, according to Oxygen.

Although the "Anaconda" singer has yet to speak out about these latest reports, she did address fans who had been hounding her on social media to announce some kind of baby news. Back in November of last year, Minaj tweeted, "Y’all want the album or the baby? Cuz ch- y’all ain’t bout to get both."

Indeed, this is hardly the first time that Minaj has been at the center of pregnancy rumors. Over the summer, Minaj caused a frenzy online when she posted a single baby emoji, garnering well over 11,000 retweets and over 4,000 comments, either asking Minaj if she was having a baby or congratulating her. Maybe Minaj just likes to have fun pranking her fans?

It doesn't stop there; Hollywood Life reported that in 2016, when she was with ex Meek Mill, Minaj was unfairly criticized by MTV Video Music Award viewers, who claimed she "looked" pregnant. In response, Meek Mill posted a photo online that appeared to show Minaj with a pregnancy bump as a joke against trolls. "People were trolling Nicki after the VMAs saying she looked pregnant. Instead of blasting them Meek thought it would be hilarious to punk them," a source told Hollywood Life.

Complex reported at the time that the above photo was taken from an actual picture of blogger and model Tammy Hembrow. (See the original Instagram post below.)

Also, in 2015, Minaj was hit with another round of pregnancy rumors and as People reported, she wasted no time when shutting down the speculation. At the time, Minaj was dating ex Meek Mill and she tweeted this message in response to the rumors: "No matter wut he, or anyone else says, Onika Tanya Maraj won't b pushing anyone1 out her vajayjay, until she's married. Now check that."

Given how Minaj has shut down rumors in the past, she is likely to speak out against the latest pregnancy speculation. So far, however, Minaj has not publicly addressed the rumors.

What's more, having a baby appears to be something that Minaj takes very seriously ever since she had an abortion as a teen, according to the New York Post. As Minaj told Complex in 2014, according to Entertainment Tonight:

If I'm done with my fifth album and I don't have a child by then, no matter how much money I have, I would be disappointed, as a woman, because I feel like I was put here to be a mother ... I'd rather not do anything that’s going to be on paper but I definitely will be married before I have my baby. I want to make sure I do it in that order.

Given what Minaj has shared in the past, it's clear that she hopes to be a mother someday, when she feels the time is right. And if there was baby news to report, she would likely take control of the story.