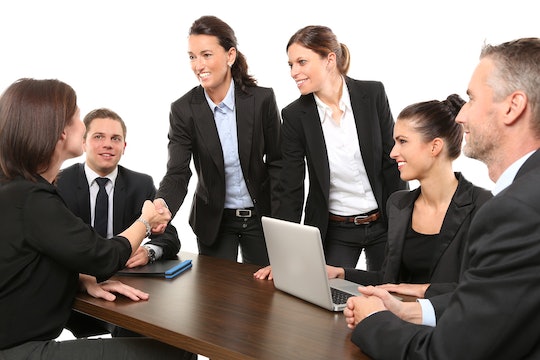 Here's Even More Proof Of The Gender Wage Gap

When opponents of feminism and gender equality acknowledge the existence of gender wage gap — instead of dismissing it as a feminist conspiracy theory — they often offer a long list of reasons for why it exists and why it is women's fault. But a recent study has refuted yet another one of those "reasons," proving that the wage gap isn't due to women having less experience than men.

The study, coming out of ISS Analytics, analyzed the work history of 105,000 directorships. Results provided evidence that more than three-quarters of newly appointed male company directors are serving on a corporate board for the first time, with only 23 percent of those surveyed having reported prior experience.

In contrast, female directors in the study did tend to have corporate board experience before taking a directorial position; 32 percent of female board members were found to have already served on one or more corporate boards, according to ISS Analytics.

The difference in the two percentages presents a classic conundrum for female executives: In order to gain experience and beat out men, you have to already have experience — even if the men you're competing with often don't.

The study also highlighted another unflattering aspect of board nominations. According to John Roe, ISS Analytics' managing director, the majority of board members stated that they were hired to their positions through the recommendations of existing directors — the majority of whom are men who tend to network with other men like them.

What the results of this study show is that women are entering higher-level positions with more relevant experience than men — not less. And they're getting to these positions by playing a man's game, most of the time. Most of the board members who responded said they were nominated for the position by other men — not other women.

According to the study, women who do manage to reach a directorial position are serving on multiple boards, sometimes more than half a dozen of them. Bloomberg presented the case of Ann Mather, a former Pixar executive, who is a director of Alphabet Inc., Arista Networks, Netflix, MGM Holdings, Shutterfly and a handful of others simultaneously.

While that means a company is getting an experienced director, it may also mean the company is not getting the specific skills it needs for that position. You are putting blinders on in your search for talent.

The good news is that our understanding of the wage gap is growing, while the gender wage gap itself is shrinking. According to the Pew Research Center, it has been slowly but surely narrowing since 1980, among younger workers in particular. As more research is conducted to discover the factors contributing to the discrepancy in pay, hopefully we are moving closer to pay equality.