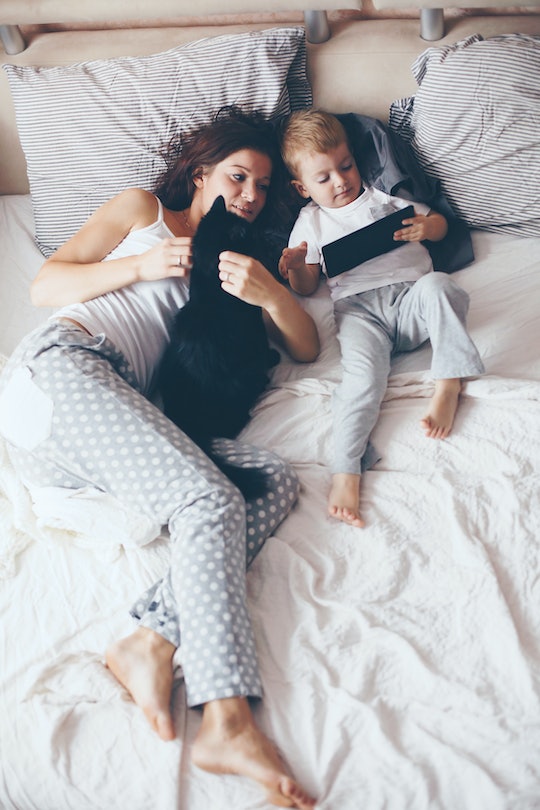 I Only Let My Kid Watch TV Shows That I Like

Like many first-time parents, I went into the adventure of parenting with many high and mighty ideals. And, just like almost every other parent in the known universe, I watched as, one by one, they fell by the wayside. It's true that it's much easier to parent imaginary children than the real, solid, living and breathing kind, and I slowly learned that a lot of what I wanted was just impossible. My dreams of never having too many toys and eschewing plastics ended as my living room was slowly filled with a series of plastic dump trucks and tractors. And of course, along with everything else, I had big ideas about screen time. Those didn’t really last, as it turns out we live in the real world, and the real world is filled with thousands upon thousands of screens. But through all the shifts, there is one screen time rule I stubbornly cling to. It might be petty, it might seem arbitrary and ridiculous to some, but it’s my rule and I love it: My kid doesn’t watch anything I don’t want to watch.

Once upon a time, my wife and I figured we’d more or less ban all screen time for our tiny little human. Then he was actually born, and it turned out we still had cell phones. But we didn’t really watch TV, so it seemed simple and easy for him not to watch TV. That lasted for awhile… until I got really sick and it turns out, that when I am sick, I binge-watch TV. He was just over 1 year old at the time, and he was against the idea of me resting at all, so finally I put on Harry Potter and The Sorcerer's Stone (we skipped the scary parts) “just this once.” I swore it wouldn’t become a habit, but then life happened. Eventually we branched out, and I realized that even with just a laptop and an internet connection, it was easy to find things to watch that interested both of us.

Nowadays, my kid watches more TV than I would prefer. While it isn’t an every single day occurrence, it’s definitely a most days kind of a thing, and a lot of those days I’m not keeping it under a super specific time limit. I'll be honest, I don't feel great about this but I also feel like he’s happy, and healthy, and it’s winter, and there are far worse parenting mistakes I could be making.

My kid doesn’t know about Caillou, and that is perhaps the biggest victory of them all.

Like almost every other parent of a toddler that I know, I vacillate between extreme embarrassment about my kid’s screen habits and staunch defense of his regular viewing of Little Bear. And while I definitely grit my teeth and silently chide myself on the days I use screens as the path of least resistance, I still hold fast to my one real rule. It might seem selfish to some, but he doesn’t watch TV that I don’t like.

It isn’t complicated: If it drives me bonkers, I just don’t put it on.

That means he’s only seen the Disney Channel in the doctor’s office waiting room. It means that he’s seen a whole lot of Mister Roger’s Neighborhood but none of Daniel Tiger (sorry, Daniel). It means that when I accidentally started the Cat in The Hat Christmas thing on Netflix and the music started up, I said “I’m sorry, mama can’t handle this, we’re going to find something else to watch,” even though my kid was totally into it. It means the shows that my friends with toddlers complain about? I’ve never even seen most of them. Honestly, it’s really, really great.

My kid doesn’t know about Caillou, and that is perhaps the biggest victory of them all.

Does that seem petty? Maybe it even seems a little bit mean? Why would I limit my kid to only programs that I can derive (at least a tiny bit of) enjoyment from? Should I maybe have sucked it up and let him enjoy the Cat in The Hat even though I didn't? Do I seem like the ultimate millennial hipster when you consider the fact that the vast majority of programing my toddler has been exposed to are, in fact, things I watched as a young kid and feel nostalgic about?

Fine, think that about me if you want to, but I’ve never had to watch Paw Patrol.

Because the reality is, if your toddler is watching TV, you are almost definitely watching it too. I’m not going to leave my almost-2 year old totally unsupervised for half an hour, solely because I’m not a monster. And I don’t like being annoyed. And if we’re going to compromise on every other thing — if I’m going to deal with the fact that my kid now runs to the spot where we set up the laptop for him and says “watch?” in a squeaky baby voice — we might as well be watching something that doesn’t suck. Parents often talk about letting little kids watch TV as a “break” for them, but it doesn’t feel like a break if you are trying not to curse the whole time because the corny jokes are so bad you want to pull out your eyeballs. Or the music, my god, most kids shows have the most insufferable music on earth, why is that?

Not to brag, but I have pretty great taste. I don’t loathe all kids' shows, just some of them. So until my kid can develop strong preferences of his own, he’s going to be guided by mine.

Plus, not to brag, but I have pretty great taste. I don’t loathe all kids' shows, just some of them. So until my kid can develop strong preferences of his own, he’s going to be guided by mine, at least to some degree. I decide what clothes he wears (although he’s starting to help with this one) and what’s for dinner, and I’m going to pick what’s on during screen time too. One day, he won’t like everything that I like, but he’s gotta start somewhere, and that somewhere is with my excellent guidance. Recently, we discovered the magic that is Sarah and Duck, and although I had some trepidation about trying something new, it turns out we both really love it. Having a show that I don't mind watching with him is a blast, and we're both happier when we can get into something fun together.

Look, I’m being honest, I know it can’t last forever. One day he’ll go to school, he’ll have little friends who will tell him what is cool and what is uncool, and I’m pretty sure watching Mister Roger's Neighborhood reruns from the '70s with your mom is uncool. We’ve got a whole lifetime of putting up with crappy stuff just because he likes it. But right now, today, I'm in charge, and that feels good.

Raising tiny children can be so hard — there are so many things about it that are exhausting and overwhelming. But there is one silver lining, and that is that they can’t force you to watch Minions yet because they don’t even know that it exists.

Here's where I stand: there's no reason to sit through yet another cartoon that makes you cringe. I mean, the fact that I let my kid watch TV at all is already a huge and unnecessary treat and I know he doesn’t have enough of a concept of what’s out there yet to care too much about the shiny show they're watching. One day, our kids find out about all the crap that’s out there that will make you want to pull your hair out. But that day is not today. And that’s something worth celebrating. I think I'll toast with my kid, the one who thinks I’m the coolest for letting him watch Reading Rainbow.