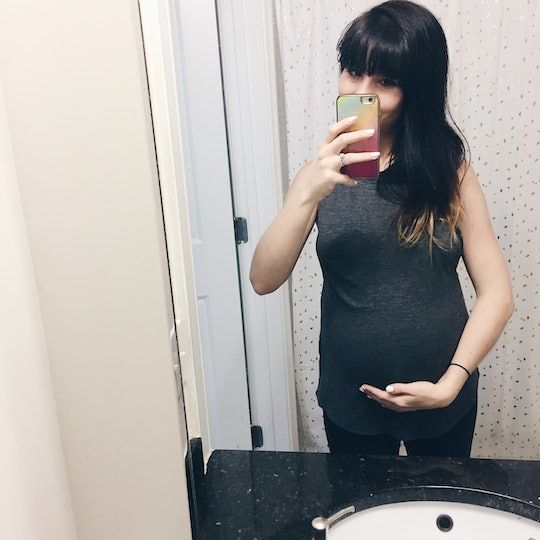 Body positivity has been a buzzy term all over the internet lately, with people coming together in solidarity to embrace things they love about their bodies, while encouraging others to do the same. Instagram in particular has become a place where people can showcase their bodies — curves, stretch marks, scars and all — and receive tens of thousands of hearts from like-minded individuals who reinforce the notion that every body is beautiful.

Some of the biggest physical changes happen during this chapter of pregnant women's lives. It can easily feel like your body doesn’t quite belong to you anymore, and parts of it might become unrecognizable. And for people who struggle with these changes because they have a history of disordered eating, loving your body can seem like a truly daunting task. And I think the body positivity movement largely ignores that.

As a survivor of anorexia, I already have a complicated relationship with my body. At the height of my eating disorder, I had lost any and all sense of objectivity when it came to my own appearance. I started every day by weighing myself, unable to see a difference in my appearance no matter how much the number on the scale went down. At my lowest weight — a number that was dangerous and life-threatening — I still felt as though I had more pounds to lose.

If I’m being honest, I don’t think I fully love my body right now. But maybe that’s OK.

Now, almost ten years into my recovery, I can say that I’ve arrived at a place that is both stable and healthy. And while I was worried at first that my pregnancy might trigger my disordered eating habits, I’ve been able to gain the appropriate amount of weight for my size with little difficulty.

But being OK physically is not the same as being OK emotionally, and I would be lying if I said that during my pregnancy, I always like what I see when I look in the mirror. And while it would be easy to post a full-length photo of myself on social media and write an inspirational caption about pregnant bellies, it wouldn’t feel entirely genuine. Because if I’m being honest, I don’t think I fully love my body right now. But maybe that’s OK.

The growing body neutrality movement gives us permission to ditch words like “love” and “embrace" when it comes to talking about our bodies. It gives us a pass on those days when we’re not feeling elated by our own image, and it tells us that it’s okay to not be soaring with self-confidence. As The Cut notes, Autumn Whitefield-Madrano, author of Face Value: The Hidden Ways Beauty Shapes Women’s Lives, sums this message up rather eloquently. “My problem with body love, beside the fact that it’s a high standard, is it’s asking women to regulate their emotions, not just their bodies,” she writes. “I don’t see the pressure on women really easing up, and then you’re supposed to have this bulletproof self-esteem on top of all that. It’s not something we can really live up to. Body love keeps the focus on the body. The times I’m happiest are when I’m not thinking about my body at all.”

If you also struggle to say the L-word to your body and truly mean it, know that it’s perfectly understandable if you can’t. Sometimes, just feeling neutral is good enough.

Whitefield-Madrano’s latter point certainly gets right to the heart of the matter. During my recovery from my eating disorder, I found small victories in the moments of the day when I would forget about food and calories, or what my body looked like at any given time. Now, in my third trimester, I feel similarly. When I catch a glimpse at myself in the reflection of a window, I feel a pang of insecurity. I am much happier when I’m not focused on my body in the slightest.

To me, body neutrality is about getting to a place of comfort with my body. It’s neither overtly positive nor negative, but rather, a sense of normalcy that serves as stability. Maybe one day, I’ll get to a place where I can join the ranks of “body positive” women on the internet. I certainly admire them, and I think they are worthy of all the praise and viral attention that they receive. But if body neutrality is the farthest I can go, then that’s okay too. And if you also struggle to say the L-word to your body and truly mean it, know that it’s perfectly understandable if you can’t. Sometimes, just feeling neutral is good enough.

More Like This
Yes, It’s Possible To Get Pregnant If You Have An IUD
Pelvic Pain During Pregnancy: What Causes It & How To Deal With It
Festive Mommy & Me Holiday Nail Ideas To Try
The “Tripledemic” Is Scary, But I Feel Less Helpless When I Wear A Mask