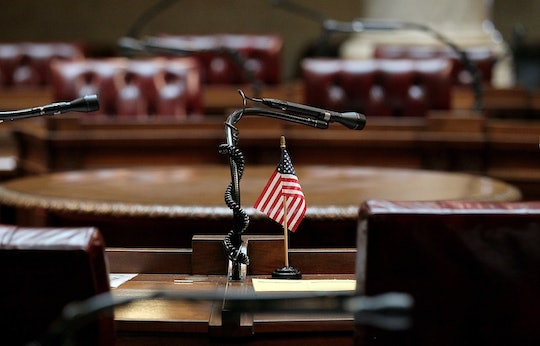 What Democrats Are Doing To Stop Trumpcare

Though the GOP’s divisive plan to repeal and replace Obamacare is on its way to the Senate for a vote, Democrats are reportedly planning to stop Trumpcare by using various parliamentary procedures to slow down the legislative process. Beginning on Monday evening, Democrats plan to start an all night “talk-a-thon” in order to take control of the Senate floor and highlight their opposition to the Republican bill — officially known as the American Health Care Act — which could leave millions of Americans uninsured.

Because Democrats don’t have enough power to stop a vote from happening, MSNBC reported that they’re hoping that this initiative will draw attention to the many issues with Trumpcare and change the minds of other lawmakers. NBC News reported that they need at least three GOP senators to vote against the bill "if and when" it reaches the floor.

Minority Leader Chuck Schumer and fellow Democrats will give a “series of speeches” about health care and are expected to object to what’s known as unanimous consent requests, which is essentially a way to expedite the lawmaking process, according to VICE. They will also reportedly sit in their seats on the Senate floor all Monday night in hopes that the bill, which Democrats have not seen or worked on, will be forced to a committee vote, according to NBC News. By doing so, it will make it harder to get anything else done and will slow down all other Senate business.

Democrats and many other Americans have become even more concerned with the bill since none of the text has yet to be released to the public and Republicans have not planned any hearings on the bill. CNBC reported that GOP leaders hope to vote on the bill before the July 4 Senate recess, which is less than two weeks away.

"Republicans are drafting this bill in secret because they're ashamed of it, plain and simple," Sen. Schumer said in a statement, according to Politico. "These are merely the first steps we're prepared to take in order to shine a light on this shameful Trumpcare bill and reveal to the public the GOP's true intentions: to give the uber-wealthy a tax break while making middle class Americans pay more for less health care coverage."

The statement continued, "If Republicans won't relent and debate their health care bill in the open for the American people to see, then they shouldn't expect business as usual in the Senate."

Whether or not the Democrats' plan is successful and they're able to sway some opinions in the coming days, it's becoming more evident just how many people are not OK with Trumpcare and want transparency when it comes to the nation's health care policies.