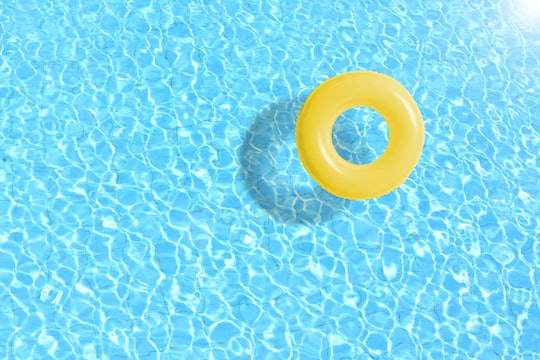 Here’s What Drowning Actually Looks Like, Because Most Parents Don't Know

With summertime in full force and the pools open, it’s really important for people to know what drowning actually looks like, especially parents. No matter what the movies show or what you hear, it only takes seconds for someone to slip under the water silently. According to the Centers for Disease Control and Prevention (CDC), from 2005 to 2014, there was an average of 3,536 fatal drownings in the U.S., which averages out to about 10 deaths per day. And “one in five people who die from drowning are children aged 14 and younger.” With these horrific numbers, it’s important to know the signs and what to do if it happens.

Thomas Gill, public information officer for the United States Lifesaving Association (USLA), tells Romper that drowning in real life looks absolutely nothing like it does on TV. “The arm-waving, screaming victim is more apt to be silent or barely audible as they struggle to stay above the surface,” he says. “A child can slip below the surface without a sound if there is no swimming ability and a drop off in the open water or in a pool.”

A video from WIVBTV News 4 shows exactly what drowning looks like, and it's nothing like you thought. Literally, a young boy is drowning just steps away from several people in the ocean. Dr. Frank Pia, an instinctive drowning response educator that recorded the rescue, tells the reporter that you can tell the boy is drowning because he's not moving in or out from shore, neither left or right — he remains in the same position, extending his arms out to the side. Because his mouth is sinking below and resurfacing above the water, it's an instinctive drowning response — he's not crying out for help or yelling — he's trying to breathe. His arms are busy grabbing the surface of the water, and when he's finally rescued, you can see that he stops struggling and begins looking around for safety as the lifeguard holds him up over the water.

In a young child, the drowning response can look like they're attempting the dog paddle movement. But according to Pia, people drowning only have about 20 to 60 seconds of struggling before they fully submerged. Children have less time.

So what do you do? What can a parent do to prevent their child from drowning? Obviously, they should keep a close eye on their kid, but what else? Is there a certain way to get them out of the water safely? “This is a tough situation in the open water, knowing that a parent will do everything they can to save a child — including putting themselves in harm's way,” Gill says. “There are too many stories of parents dying while attempting to rescue a child. If a child is in distress in the water, the first rescue attempt should be made from the shore or side of the pool using something that can be extended out or thrown to the victim so that the rescuer does not become a victim.”

“Most people have some types of floats or items that float with them,” Gill adds. “Use them.”

How can parents ensure their child never even gets to this point? It’s important to teach them the basics of swimming and water safety from a very early age. According to Baby Center, children as young as 6 months old can take a class with you. This just makes them comfortable in the water, however, and doesn't necessarily teach them how to swim.

In a new policy, the American Academy of Pediatrics (AAP) suggested that children ages 1 to 3 years old should take swim lessons because new studies have shown that they’ll be less likely to drown if they’ve had formal instruction on swimming. (The original recommendation was 4 and older.) To find a swimming instructor in your area, you can visit the USA Swimming Foundation’s website.

The AAP also recommended that you always be within arms length of any child when near bodies of water, and that includes everything from the ocean to swimming pools to bathtubs. If you have a pool at home, it must be enclosed by a fence around the entire perimeter to prevent an accident, and parents and caregivers should also learn CPR.

Interestingly, the AAP also recommended not using “floaties” or inflatable arm bands instead of a life jacket, because they can deflate.

Unfortunately, even with lessons, no child is 100 percent safe from drowning. Always stay an arm's length away from your child around water, and make sure you have floatation devices near by in case the unthinkable happens. You may want to instinctively jump in immediately, because of course, but the USLA suggests you bring in a flotation device with you to protect both you and your child from drowning. Stay safe this summer by staying informed.