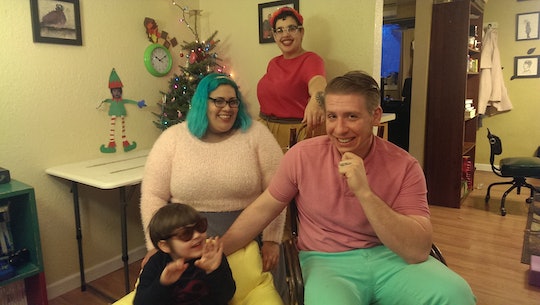 Here's What It's Really Like To Parent When You're Polyamorous

My kid has three parents. There’s me, his dad Jon, and his mom Sam. We are polyamorous, meaning that the three of us are in a relationship and raise our child Arthur together.

It's tough to determine how common polyamory is in the United States. For starters, there are differing definitions as to what polyamory entails, and few people are willing to openly disclose that they are poly because of the stigma associated with non-monogamy. However, according to 2014 estimates from researcher Kelly Cookson, there are between 1.2 and 1.4 million non-monogamous couples in the United States alone, indicating that there are a lot of families like mine out there.

Sometimes, parenting with two other people is a godsend. Sometimes, it’s close to impossible, and occasionally it can be heartbreaking. But I do know one thing: If I didn’t have both of my partners around to co-parent with me, I don't know if I would feel like my own person.

The biggest advantage of having two co-parents is purely practical: we save a bundle on daycare, because there's always a parent around. So much of parenting consists of the mundane questions of child care: who is going to fix the kid a sandwich? Who can take him to the doctor? Who can take him to school?

With three people, the burden is a little lighter. There's usually someone else there when I need to duck out and take some alone time. Arthur always has a well-rested, engaged parent at his disposal — and sometimes two. If he’s lucky, he gets all three of us at once showering him with affection.

If I didn’t have both of my partners around to co-parent with me, I don't know if I would feel like my own person.

Perhaps most importantly, however, having two co-parents lets me pursue my career and my passions, in a way that I'm not sure I'd be able to if I were raising Arthur on my own. I work full-time, and I am a fiction and non-fiction writer in what passes for my spare time. With the three of us co-parenting, I can work and write and be a parent, while Jon can work and play music and Sam can be an activist. We get what we need from life and from each other, and we give everything we have to the family because we feel energized in all these spheres of our lives.

That said, poly parenting isn't all roses and sunshine. It’s hard enough navigating Important Parenting Decisions with one other person, so it's much harder navigating them with two. Sometimes we’re lucky, and all three of us agree on what to do. Most of the time, however, that's not the case.

Since parenting decisions are so fraught and loaded with tension, we often have to tread carefully around each other. What might be a simple, clear parenting decision for one of us can be an emotional minefield for another. Once, I threw out some of Arthur's baby clothes once, not realizing Jon wasn't ready for them to be thrown away. That was not pretty. And while these arguments happen with couples all the time, with a triad there’s double the chance of it happening.

We are a family in every way that counts — except on paper.

And then there’s the heartbreak. We are a family in every way that counts — except on paper. While Jon and I are Arthur’s biological parents, Sam is not recognized as his legal guardian, even though she's lived with us since before Arthur was born. My son calls Sam "Mama," but on paper, she's little more than his roommate. Even though he has her smile and her quick way of speaking, they have no legal relationship, and she doesn’t have rights to visit him in the hospital.

This struggle isn't unique to us. Most polyamorous families grapple with not being treated as a legitimate family in one way or another, with some partners being turned away from a sick child's hospital bed and some even being fired from their jobs for being polyamorous. Because polyamorous families aren't yet recognized under the law, the best we can do for non-biological poly parents is form a non-binding co-parenting agreement.

While we try our hardest to make home safe and stable for Arthur, there are times when our family structure can feel incredibly tenuous. I have had to create files on files of legal documents to make sure my family stays intact without me in the event of my death, that Arthur stays with Sam, that what few assets I've managed to cobble together will go to all three of them. We are a square peg, and the legal system is a round hole.

Yet even though the law might not recognize us as a real family, we're a real family to the one person that truly matters: Arthur. He is in kindergarten now, and while he is beginning to understand that our family is a rare beast, three parents is all he's ever known; it's his version of normal. Sometimes I wonder what will happen as he gets older, if he will long to trade us for a more conventional family structure. But for now, he is so loved and so happy that he tells his friends that they should try and get three parents, too.

More Like This
43 Instagram Captions For National Brother’s Day That Say It All
Say What's In Your Heart With These Stepmother's Day Quotes
Stepmom Quotes & Sayings For Every Occasion
Should You Be Giving Your Toddler Melatonin To Help Them Sleep?