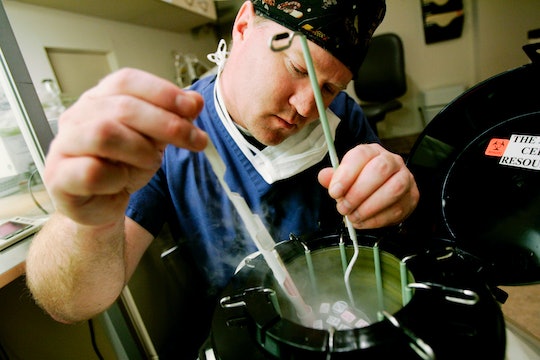 Another year, another Sanctity of Human Life Act introduced into the House — but this year, of all years, it could actually stand a chance of passing. These anti-choice "personhood" bills — defining that life begins at conception and assigning embryos the full rights of persons — were all but guaranteed to die in Congress in years past. But with a Republican-controlled House and Senate, and an increasingly executive action trigger happy president, there's no telling what could happen with the latest iteration of this bill, H.R. 586. There's so much focus on personhood's clearly anti-abortion agenda that most overlook a crucial impact that H.R. 586 would have on millions of Americans. This is what no one ever talks about when they talk about personhood.

One of the loudest non-profits pushing the personhood agenda is Personhood USA, which states in its mission that it seeks to protect all human beings "by love and by law" — and this includes embryos, which it calls "preborn babies." That all sounds very nice and comes straight out of the traditional family values playbook, but the main goal of these bills is to utilize legal gymnastics to criminalize abortion — without letting a tricky thing like Roe v. Wade get in the way. But see here's the thing: Personhood bills could outlaw IVF, preventing the creation of human life that this agenda is so concerned with protecting in the first place.

While IVF is never explicitly mentioned by name anywhere in the text of H.R. 586, the Sanctity of Human Life Act is so vaguely worded that it leaves way too much legal room for interpretation.

(1) the Congress declares that—

(A) the right to life guaranteed by the Constitution is vested in each human being, and is the paramount and most fundamental right of a person; and

(B) the life of each human being begins with fertilization, cloning, or its functional equivalent, irrespective of sex, health, function or disability, defect, stage of biological development, or condition of dependency, at which time every human being shall have all the legal and constitutional attributes and privileges of personhood; and

(2) the Congress affirms that the Congress, each State, the District of Columbia, and all United States territories have the authority to protect the lives of all human beings residing in its respective jurisdictions.

IVF is a medical procedure that some infertile and most LGBTQ people require in order to conceive. In this procedure, fertilized embryos are created — but not every embryo will "make it," so to speak. Some embryos stop growing in the lab and effectively die in culture. Some will fertilize and develop, but are graded as poor quality embryos, meaning they'll have little chance to implant and become a viable pregnancy, and are typically discarded by fertility doctors.

If personhood became the law of the land, these standard practices of IVF could be legally interpreted as crimes, as a fertility doctor could be accused of murdering a human being. See the problem here?

But it doesn't stop just there. When I went through IVF with an egg donor, I had six embryos successfully fertilized and two were transferred into my uterus. I'm now the proud mom of a hilariously stubborn preschooler. Sometimes it's hard to wrap my brain around the fact that one of these two microscopic balls of cells is now telling knock-knock jokes and learning how to play "Go Fish." And then I remember: All it takes is one good embryo.

I also know that embryos aren't people. I can look at the photo below and see these as two fertilized eggs as the 8-cell blastocysts they are. I don't look at these and call them my "preborn babies." They are human tissue to me — and that's all.

Freezing excess embryos is a common practice for many couples undergoing IVF. Our remaining four embryos were put on ice for two years, giving my husband and I some time to decide if we wanted to have another child. We decided to resolve with just our one and donated our remaining embryos to science. That decision felt good, like the right thing to do for us. It still feels that way.

If personhood became the law of the land, it could effectively hold all excess embryos hostage, specifically embryos that are currently stored in cryopreservation. Not all embryos survive the thawing process and H.R. 586 — with all the legal clarity of a jar of Vasoline — provides no protection to embryologists, or the prospective parents to whom those embryos belong.

If frozen embryos are held hostage under personhood, this would also effectively freeze the practice of embryo donation, where couples can donate their excess embryos to other couples who either can't create viable embryos of their own, can't afford to utilize egg or sperm donors to conceive, or have religious reservations with IVF, particularly within the Catholic faith.

Currently, 1.6 percent of all babies born each year in the United States are the result of IVF, or nearly 67,000 babies, according to the Centers for Disease Prevention and Control. If H.R. 586 becomes law, it would effectively stop any more babies being born in the United States as the result of IVF, whether the embryos created from the procedure are fresh, frozen, or donated. It would take away the fundamental right from infertile and LGBT individuals that every person should be able to create their own families on their own terms. There's no way around it: Personhood is bad for families.

If it weren't for IVF, I wouldn't be a parent. I wouldn't have my son: This incredibly bright, curious, stubborn, sweet little boy who came into being out of an immense amount of love — from me, from my husband, and from our friend who offered to be our egg donor. From our friends, his grandparents, his aunts and uncles. Even from followers of my blog who've I've never even met. If personhood happened four years ago — and it has been around Congress and state legislatures for over a decade now — IVF would be illegal and I wouldn't have the family that I have now. My son would not exist.

I cannot imagine my life without him.

So that's why I've called and emailed my representative in Congress and told him to oppose H.R. 586. RESOLVE: The National Infertility Association even made it easy to email my representative about the personhood bill right from their website; it took only two minutes, if that. Every day, when I look at my son, I see the reason I fight against the passage of personhood — and I hope you'll join me, too.