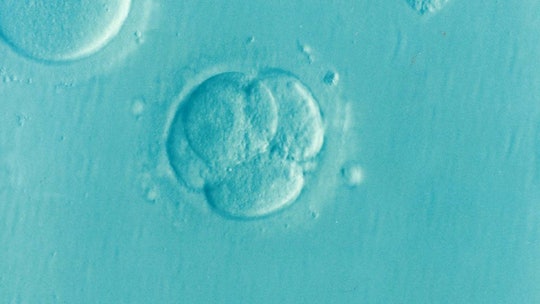 The Personhood Bill Could Ban IVF

While President Donald Trump has been busily signing Executive Orders, he's not the only lawmaker getting to work in Washington. Meet H.R. 586, the Sanctity of Human Life Act. Introduced by Republican Rep. Jody Hice from Georgia's 10th district, the bill seeks to define that "the life of each human being begins with fertilization," and, more alarmingly so, that even a "one-celled embryo" is a "a new unique human being." H.R. 586 is a classic personhood bill that goes directly against science, so how would this personhood bill affect IVF? If H.R. 586 were to become law, it would effectively ban the practice of in vitro fertilization entirely in the United States.

As calculated pieces of anti-choice legislation, personhood bills represent a subtle shift in tactics from the anti-choice movement. Instead of criminalizing the act of abortion, personhood bills seek to codify embryos as people while legalizing the rights of the "person" created at the moment of conception, thereby making abortion a crime. While personhood bills are aimed at stopping abortions, they also end up hurting anyone who needs IVF in order to become a parent. This includes not just the 7.5 million people with infertility in the United States, but any LGBTQ or single person who must utilize medical intervention to start their family.

In an action alert on its website, RESOLVE: The National Infertility Association lays out explicitly how personhood bills put the kibosh on procedures like IVF:

If microscopic fertilized eggs/embryos are deemed as human life, anything that puts an embryo at risk could be a violation of law, even if its goal is the undeniable social good of helping someone have a baby.

It helps to have an understanding of exactly how personhood bills would ban IVF by understanding the process of IVF itself. Once a woman's eggs are retrieved and fertilized in vitro — outside of her body — at least one of the resulting fertilized embryos is transferred back into her uterus, with the hope that it will implant into her uterine lining.

But not every single embryo that is created during IVF is used; some just aren't suitable for embryo transfer and are usually discarded by the embryologist. The American Society for Reproductive Medicine has guidelines on the number of embryos to transfer during IVF and, with a few exceptions, it's safer for both the mother and her potential offspring for a fertility doctor to transfer at most two embryos at once. If H.B. 586 were made law, a woman would have to have any and all embryos created during an IVF cycle transferred at once, which would be counter to recommended and safe medical practices.

H.R. 586 and its attempt to assign personhood status to single cells is nothing new. The Sanctity of Life Act was initially introduced into Congress as early as 1995, but went nowhere. A decade later, it was reintroduced with updated language reflective of the legal maneuvering intrinsic to the personhood movement, and again failed. A Sanctity of Life Act has been introduced every year since then, never managing to pass. Unsurprisingly, this iteration of the Sanctity of Life Act was originally sponsored by Rep. Jody Hice, who received campaign contributions from two prominent anti-abortion PACs last year, according to campaign finance filings from the Federal Election Commission.

For the infertility community, they've been fighting the personhood battle for more than a decade now. But what has many in the infertility and family building community worried is the uncertainty of Trump's Administration — especially with a Republican-controlled Congress and the fact that Vice President Mike Pence has supported personhood legislation in the past.

While much of the focus as been on how H.R. 586 would affect abortion, it's vitally important for Congress to hear how it would effectively ban IVF for anyone who needs the procedure to become a parent. The more voices, the better — calling your representative can create real change. While H.R. 586 is not likely to pass, it doesn't mean you can't call your member of Congress right now and tell them to oppose H.R. 586.