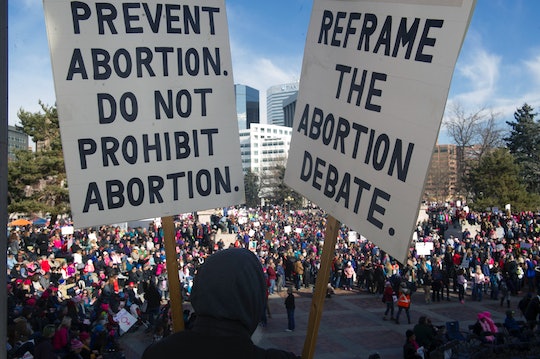 Women's reproductive rights and access to safe abortions was just one of the many reasons hundreds of thousands of women marched over the weekend. Just in case you thought anyone was overreacting about their fears, it might be a good time to get bill H.R. 586 on your radar. The controversial bill was introduced in the House of Representatives last week, while everyone was buzzing around getting ready for the inauguration. Sponsored by Georgia Rep. Jody Hice, a Republican, the bill would aim to define life at the time of fertilization.

The bill is co-sponsored by 20 other Republican members of the House and aims, according to Hice's website, "to end the plight of abortion on our nation." He would like to define life at conception "without exception." There is no text of the bill available yet (it usually takes a few days for the Library of Congress to process bills and it was, obviously, a busy week in the capital), but one would assume that if life begins at fertilization without exception, that also means in cases of rape or incest.

But that just isn't true. A fetus is not baby and could not survive outside of a woman's womb on its own until just after 22 weeks (and that's if the newborn gets treatment), according to medical science.

According to the Roe v. Wade decision, abortion is legal up until viability, which is why determining when a fetus could survive without the mother's womb is so important. Most researchers put fetal viability at around 24 weeks, but anti-choice legislators are always trying to scoot that viability marker up have trying to scoot that fetal viability marker up as far as possible — many states use 20 weeks — to restrict women from terminating their pregnancies, but passing a law that says life begins at conception isn't just restricting abortion. It's outlawing it.

States have tried to do this on their own before, but the bills never make it past state Senate floors. But with a Republican controlled house, and someone like Vice President Mike Pence, who gutted women's reproductive rights and access to healthcare as a senator and governor, in power, there really is no telling what could happen to Roe v. Wade and silly bills like this one.

Bickering about whether it's 22 weeks or 24 weeks is one thing (although even that hurts women), but actually believing that a fetus could survive if it wasn't living off of a woman's body to develop is just absurd. It not only denies women their right to safe and affordable abortions, but it denies science. Let's hope someone comes to their senses in the House or Senate to stop this nonsense before women die, or are jailed, for attempting an unsafe, outlawed abortion.