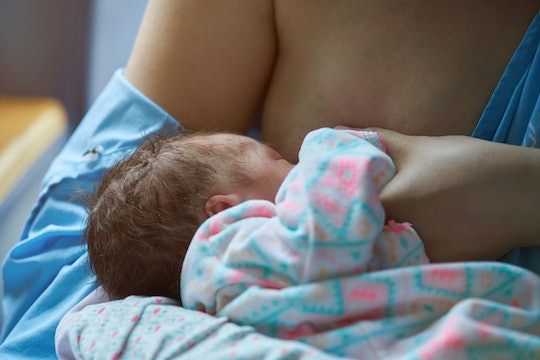 Feel Unequipped For Breastfeeding? Your OB-GYN Might Feel The Same

Kasey Jolly doesn’t think she would have breastfed for as long as she did if it wasn’t for the combined support of her OB-GYN and doula. “The only time I was ever nervous to discuss [breastfeeding] with my doctor, I was pregnant with my youngest daughter, and still nursing my eldest,” she tells Romper over email. “I decided to swallow my nerves and ask her how she felt about nursing while pregnant.” Jolly's OB-GYN gave her the go-ahead to breastfeed as long as everything was progressing with her pregnancy and there were no complications. But Jolly's experience wasn't necessarily typical.

"Information about breastfeeding and infant formula is rarely provided by women’s obstetricians during their prenatal visits," found a review of scientific literature by the Surgeon General, citing a study published in Pediatrics. Some women find they are simply not prepared for the realities and demands of breastfeeding, let alone the complications that arise post-birth.

Jolly's doctor had worked in a midwife center in Ireland for some time and she felt that made her doctor more open to natural living while still maintaining Western medicine practices. Utilizing the support of her doula throughout her pregnancies, Jolly was able to gain additional knowledge and confidence when it came to nursing, giving birth, and getting through the early days of motherhood.

Jolly's story highlights the importance of medical practitioners working in conjunction with other professionals who have extensive experience in lactation and nursing mothers. But where exactly does breastfeeding fit within an OB-GYN’s scope of practice? What do they learn about nursing moms in their education, and how does that affect the advice they offer to breastfeeding moms? Romper spoke with three experienced OB-GYNs about their expertise in breastfeeding and how comfortable they feel discussing it with their patients.

Does Medical School and Residency Measure Up?

Dr. Codi Weiner, an OB-GYN at The Women’s Specialists of Houston at Texas Children’s Pavilion for Women explained to Romper that her time in medical school had centered around the anatomy and physiology of lactation — how it happens in the body, but nothing more. It was while she was working as a resident that her training went deeper. Thinking back to Grey’s Anatomy, residents are basically physicians in training — they work directly under an attending physician, the person who is ultimately responsible for the patient. This is where doctors go into a specialty, so it makes sense that this is where the bulk of breastfeeding knowledge is obtained by OB-GYNs. Weiner’s training at Johns Hopkins involved education on breastfeeding concerns such as latching issues and mastitis, but as far as the day-to-day technicalities were concerned, there just wasn’t time for it.

Residents today are limited to how many hours they can work. They’re doing all these deliveries, but they spend very little time with postpartum patients.

“Residency is more focused on hospital-based problems,” Dr. John Thoppil, an OB-GYN in Austin, Texas, explains to Romper via email, “We learn the benefits of breastfeeding, of course, but I think one weakness in general is we don’t get as much outpatient experience. I have one colleague who trained to also be a lactation consultant. The extra training is quite extensive,” he adds.

Back in my day, we worked as many hours as we possibly could [in residency]. I think I worked a hundred and eleven hours one week, not because I had to or wanted to, but because I was there at the hospital. You saw more and you did more," recalls Dr. Richard Chudacoff, FACOG and Board Certified in Obstetrics and Gynecology, in an email to Romper.

Now that I’ve had to troubleshoot everything myself with my two children, I’m more comfortable. But that’s what did it for me — not my education.

“Residents today are limited to how many hours they can work. They’re doing all these deliveries, but they spend very little time with postpartum patients.” He remembers taking care of the same few women all the way through their postpartum recovery during his training. There isn’t an opportunity anymore for doctors to work with breastfeeding moms because typically, they only see them once postpartum.

How Do OB-GYNs Really Feel About Discussing Breastfeeding?

In her time with patients, Weiner finds herself bringing up the possibility of breastfeeding concerns before her patient does, which she says again is due to her own breastfeeding experience. “I think a lot of it is because there are lactation consultants — people who do this for a living — and patients direct their questions more to them than us.”

In Dr. Thoppil’s practice, the benefits to breastfeeding for both mom and baby make it easy to bring up. “Everyone has heard about the benefits to the baby,” he explains, “Not everyone is aware of the benefits to the mother, such as lower breast cancer, diabetes, and cardiac risk. The 500-600 calories burned daily are also pretty awesome.”

“I do have a conversation with my patients, especially first-time moms,” says Dr. Chudacoff, “Second-time moms tend to know a lot more than me.” He laughs. “What I do tell my patients is, look, it’s very simple. Babies are like guys in that they will take the easiest way out every time, and if you breastfeed and bottle feed, they’re just going to take the bottle. So it’s work. If you want to breastfeed, you have to breastfeed and you have to stay hydrated.”

He goes on to explain that breastfeeding education used to happen within families — it taking a village, so to speak. “We don’t have that anymore. Breastfeeding is similar to pregnancy in that it's not a disease. It's a thing that you can do and you shouldn't take it out of the commonplace and turn it into a sterile clinical action. I think we get a little too technical with it.”

Is More Training For OB-GYNs Needed When It Comes To Lactation Support?

“I had already been an OB-GYN for years when I had my first child and I still had to figure out everything on my own,” Dr. Weiner says. “I understood the anatomy, physiology, and pathology, but I didn't understand the day-to-day. So I think that education is very, very lacking for us.” This sentiment is echoed by Dr. Thoppil and Dr. Chudacoff.

The truth is, residents probably aren’t getting the proper time to spend with a nursing mom where she could truly learn from them. There are so many wonderful OB-GYNs out there providing quality care to pregnant and postpartum mothers, but frequently, breastfeeding expertise needs to be referred on to a lactation consult who specializes in nursing issues.

“I think it’s very important that [patients] are proactive about breastfeeding,” advises Dr. Weiner. Women should plan on getting their resources in place before they are in the delivery room, because if issues come up, they already know who they can call. For the most, that’s preferably going to be a lactation consultant.

More Like This
Sex And Mom Guilt: When I Date Someone New, Am I Cheating On My Kids?
Here’s How Many Calories You Burn When Nursing
10 Ways Breastfeeding Is Good For Moms, Too
Does Pumped Breast Milk Have Antibodies? Experts Weigh In