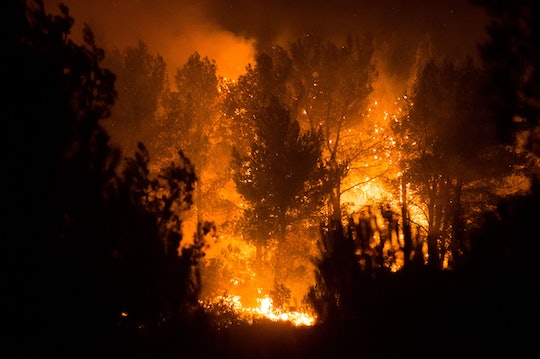 Wildfires Are Raging Across 4 States — Here's What We Know

As of Wednesday, more than two dozen wildfires continue to rage in the Pacific Northwest, scorching hundreds of thousands of acres between Oregon and Washington. Although the fires have been burning since July, two wildfires that flared over the weekend have engulfed the region in flames. Here's what officials know about the fires in the Northwest, because there doesn't seem to be an immediate end in sight.

On Saturday, a fire was sparked at Eagle Creek Trail, a 25.6-mile stretch in the Columbia River Gorge National Scenic Area near Portland, Oregon, according to NBC affiliate KGW. The Eagle Creek Fire burned through more than 10,000 acres, and eventually merged with the Indian Creek Fire that blazed north of Oregon's Lost Lake since July. The massive wildfire jumped the Columbia River overnight Monday, sparking a fire on the Washington side of the river, KGW reported.

Combined with other wildfires raging in the region, many cities in Oregon and Washington are covered in ash and smothered by smoke, according to the New York Times. Logan Johnson, a National Weather Service meteorologist in Seattle, told the paper,

If you look outside, you might think it’s just clouds. [It's] nothing we’ve observed in quite some time.

Where Are The Fires Burning

More than two dozen active wildfires are burning from southern Oregon to northern Washington. For specific areas, you can click through The Oregonian's real-time map tracking all of the fires in the region. The Eagle Creek Trail Fire seems to be one of the more significant wildfires, though according to KGW.

There are also wildfires blazing in northern California, as well as throughout Montana. According to the Billings Gazette, flames have engulfed much of western Montana.

Hundreds of thousands of acres have been destroyed by the different fires. The Eagle Creek Fire scorched more than 10,000 acres on both sides of the Columbia River Gorge, according to the Seattle Times. Another wildfire in north central Washington, known as the Diamond Creek Fire, burned about 100,000 acres, while the Chetco Bar Fire, which started in July, has destroyed more than 176,000 acres of land near Brookings in southern Oregon, KGW reported.

What Are Officials Doing

According to the Seattle Times, Washington Gov. Jay Inslee declared a state of emergency in response to raging wildfires. Officials in Oregon and Washington have also issued evacuation orders for residents, according to KGW. KGW also reported that more than 150 hikers stranded overnight by the Eagle Creek Fire had been rescued on Sunday.

The Seattle Times also reported that 200 soldiers were dispatched Tuesday to help beat back the flames in southern Oregon. Air quality concerns have also forced Kent School District officials to cancel school activities and outdoor practices Tuesday, according to the Seattle Times.

What Caused The Fires

According to CNN, Oregon State Police believe a 15-year-old boy from Vancouver, Washington, may have ignited the fire along the Eagle Creek trail while playing with fireworks in the area. Officials said the teenager is cooperating with the investigation. No arrests have been made, nor have charges been filed so far, CNN reported.

Lightning strikes are thought to have caused most of the major wildfires in the area, according to KGW. Officials are still investigating the cause of some of the other fires raging in the Northwest.

When Will The Fires End

According to KGW, officials believe that most of the fires will be contained by early October. There is also a chance of rain Wednesday and Thursday that may help calm the fires in the Gorge and southern Oregon. But, KGW reported, those storms may have thunder and lightning, which could spark other fires.