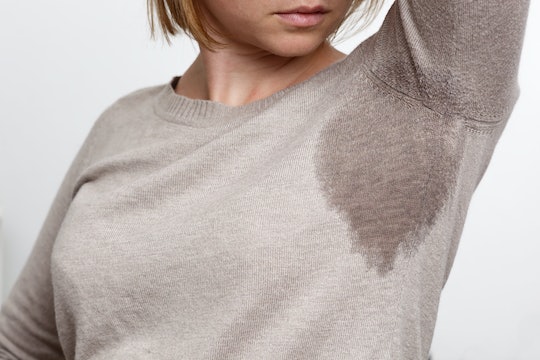 Nobody Tells You About Postpartum Sweating, & Y'all, It's The Pits

I am not one who likes hot weather or heavy blankets — I thrive when the mercury dips below 60. I am the girl who would pick up and move to Alaska to be a homesteader, if it weren't for all the homesteading that goes along with it. (I cannot be expected to live without Amazon PrimeNow.) So when I started sweating like a politician after having my daughter, it was incredibly annoying. Turns out, it's a thing. A common one. And what you need to know about postpartum sweating may surprise you.

The postpartum period couldn't be more fun. Your breasts swell like 99 balloons, your vagina feels like it was scrubbed with a pine tree, you have a screaming human who requires constant attention, and your clothes still don't fit. It can also be really, really warm. Postpartum sweating, particularly at night, is fairly common in the days and weeks after pregnancy, and normally doesn't signal a problem, according to The Cleveland Clinic. The same hormones that affect your cycle and your pregnancy, also cause these lovely night sweats, noted FamilyDoctor.org. For me, it would come on just after falling asleep, and by the first feeding of the night, I'd be a damp mess. It wasn't smelly stress sweat, more like the sort you'd experience after hot yoga.

It took months to clear up for me. I spoke to my OB-GYN at my postpartum appointment, and she said that a lot of pregnant women get the postpartum sweats and it's really annoying. There are ways to find relief in the interim, though. I found that sleeping in absurdly light clothing was the best bet. I chose breathable, natural fabrics like 100 percent cotton or linen. I actually bought my very first nightgown when I was sweating worse than I did before the math portion of the GREs.

The sweating itself is caused by an imbalance of estrogen and progesterone, and is closely related to the hot flashes of menopause. So closely, in fact, that some scientists hypothesize that it is the "evolutionary by-product of postnatal warming," according to The Journal of The North American Menopause Society. The Research Journal of Medical Sciences noted that this is the most common skin complaint of the postpartum period, even above acne, and it can last just a few weeks or several months. It also tends to linger if you're breastfeeding as the hormones continue to be disrupted by the process.

Try sleeping with a fan pointed directly at the most affected areas. It not only cools you down, but for me, it sometimes prevented the night sweating. Coincidentally, sleeping with a fan on while you share a room with your baby is proven to reduce your baby's risk of sudden infant death syndrome. According to the Archives of Pediatric Adolescent Medicine, it cools the baby down and decreases the amount of carbon dioxide in the air by dissipating it in the room. But mostly, it just felt really great on my clammy, hot skin and incredible reserves of underboob sweat.

I also learned to keep a thermos of very cold water beside my bed at night. Between the sweating and the breastfeeding, I was constantly on my guard for dehydration. Drinking the cold water wasn't just a relief from the heat and thirst — it also helped me keep my breast milk supply up, which I was very concerned over. Along with the hydration, I started using antiperspirant in places I never thought I would — namely, under my breasts, between my thighs, and around the softness that lingered on my belly after delivering my daughter. While it's not a perfect solution by any means, it does help.

If it's really bothersome, or you're worried you're sweating more than you should, definitely contact your doctor. While postpartum sweats are normally something that isn't worrisome, there are definitely some conditions, like hyperthyroidism, that should be ruled out, according to The Mayo Clinic.

There are far more trying aspects of pregnancy and childbirth than postpartum sweating, but after all the work you went through to carry and deliver your baby, it can be triggering and upsetting. Remember that it's temporary, and that man invented air conditioners for a reason, so if you have to give in and sleep on top of one, go ahead. You've earned it.