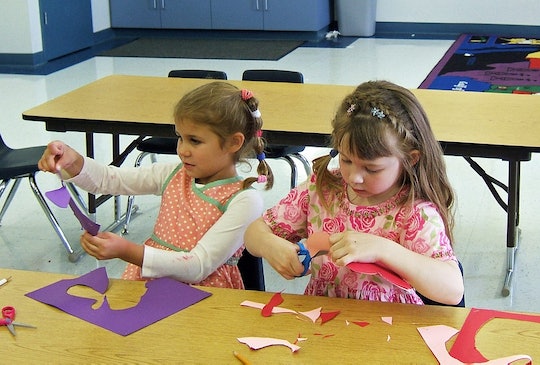 Girls Still Face Sexism At A Terribly Young Age, & It Will Piss You Off

Children simply do not start out in this world with gender bias. That whole "girls are all like this, boys are all like that" thing isn't something they are born with; but that doesn't mean they won't learn it, and learn it far too well, along the way. A recent study pinpointed the age when gender bias starts at school, and it's probably a lot younger than you realize.

In conjunction with International Day of the Girl, Save The Children released data from a survey on Tuesday that looked at gender bias in children. Specifically, bias against girls. While experts have found that gender identification and recognition begins around the age of 3, it seems children don't make assumptions about gender-based behavior until they have been in the school system for a few years, actually. Save The Children surveyed around 1,900 fourth graders in Sierra Leone and Cote D'Ivoire, as well as 500 fourth graders in the United States. The children (both boys and girls) were asked whether they agreed with a series of leading questions about gender bias. Things like, "Are boys smarter than girls?," and "Should a wife obey her husband?" The results? More than 40 percent of American boys agreed that boys were smarter than girls.

Perhaps almost as upsetting, around five percent of girls agreed that boys were smarter than girls, and a further 22 percent believed education was simply not as important for girls as it was for boys.

This is clearly a disturbing trend considering the long term effects of gender bias. As developmental psychology professor Christia Spears Brown told Newsweek about the study:

What they always see is that prototypical Einstein image. So when you ask kids, 'Who can be a scientist? Who can be a genius? Who's the smartest in their school?' they pick men and boys.

The researchers went on to point out that this gender bias against girls continued with their parents at home far too often. More than 30 percent of fathers who were surveyed said they believed that boys were smarter than girls, and 25 percent of those fathers also felt educating their sons was more important than their daughters' education, according to Fast Company.

Caroline Myles, president and CEO of Save The Children, told Fast Company that the organization wants to make it clear that girls are "worth more than the world tells them." Myles acknowledged that one of the first integral steps is to admit that a gender bias does exist, and then move forward with educating children on equality:

On International Day of the Girl, we want to let girls know that they are worth more than the world tells them. Our findings show that we need to work on changing laws AND changing attitudes to give girls the futures they deserve. It will take a combination of the both to ensure equal education is prioritized for every last girl, and to help bring an end to child marriage and gender discrimination.

While a girl's self-worth and identity can absolutely be bruised by this sort of pervasive gender bias, her future is also at stake. As Brown pointed out to Newsweek, a girl who goes to school with the assumption that they aren't as "smart" as a boy creates unconscious decisions that could absolutely affect her future:

It's hard enough to stay in school, stay engaged, and stay motivated. Now try doing it while thinking you're simply not good enough.