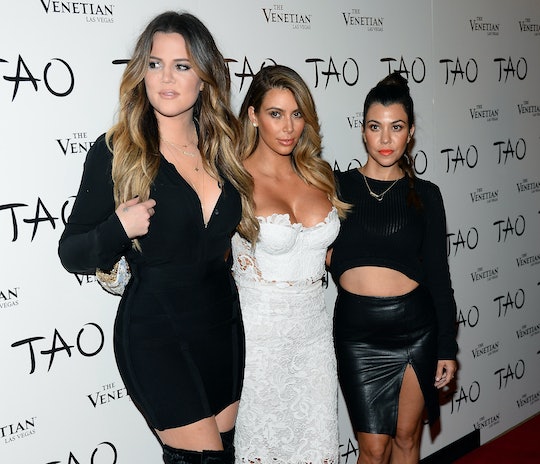 I can't believe it. It's almost time for my personal favorite of the Kardashian/Jenner clan, Khloé, to give birth to her little girl. I wish I wasn't as invested as I am, but what can I say? It's just too exciting for words. Khloé is so close to her due date that she's reportedly nesting in Cleveland with boyfriend, NBA player Tristan Thompson, and getting ready to become a first-time mom. I'm wondering if she's reading all the parenting books or kicking it old school and asking her sisters for advice. If so, who would Khloé Kardashian go to for parenting advice?

The 33-year-old Good American jean designer has a plethora of options in her family these days. First of all, she has her oldest sister Kourtney Kardashian, who is the mother of 8-year-old son Mason, 5-year-old daughter Penelope, and 3-year-old son Reign with ex-partner Scott Disick. She also has sister Kim Kardashian West, who just welcomed her third child, daughter Chicago, via surrogate with husband Kanye West. Chicago joins 4-year-old sister North and 2-year-old brother Saint. And finally, there's her youngest sister Kylie Jenner, who is a first-time mom to new baby Stormi Webster with boyfriend Travis Scott (brother Rob Kardashian also has 1-year-old daughter Dream).

With all of these options, plus her mom Kris Jenner, who is Khloé turning to for advice?

Sources close to the Kardashian sisters told People that Khloé has been turning to Kim for advice, telling the publication:

Khloé has really only been asking Kim for advice. She agrees more with Kim's parenting style than Kourtney's. [Khloé]’s also older and more mature than Kylie so her approach will be different than a very young mom.

Although Khloé might not be seeking out advice from her youngest sister, the two have reportedly been comparing notes along the way, according to People:

Khloé and Kylie aren’t comparing notes per say but they’ve definitely talked about how they’ve been feeling. Kylie’s obviously recently gone through what Khloé is going through now and they’ve only gotten closer as sisters through this experience.

It makes sense for her to reach out to different people for different reasons, of course. And considering Kim welcomed a baby so recently (Chicago was born on Jan. 15), the new moms would naturally bond together, as I'm sure she also does with Kourtney.

While the Revenge Body star might be asking for some advice, that doesn't mean she's interested in being told how to parent, according to People's source:

Khloé also wants to navigate motherhood in her own way and isn’t really looking for other people to butt in. Khloé mostly wants to do things herself when the baby arrives. She will have some help for sure but she plans to be extremely hands-on.

She might not need as much advice as people think anyhow; Khloé has made being an awesome aunt almost a full-time job ever since Kourtney welcomed Mason nine years ago, and each of her nieces and nephews seem to adore her so she must be doing something right.

Now that Tristan and Khloé are all hunkered down in Cleveland, where she plans to give birth and is flying her own doctor in from California to make sure she feels comfortable, she probably has a whole lot on her mind. She has been tweeting about getting her nursery ready for the baby, and E! News reported that she's been in a "mad rush" to get all of the necessary baby equipment ready in time for her little girl's arrival.

And sure, she might be getting nervous and need a little advice. But she's a lucky gal; she has a veritable army of sisters who seem more than willing to help her out. Not to mention her mom Kris Jenner, who she told Jimmy Kimmel she wants in the hospital room for the delivery.

In other words, this girl has no shortage of people who will be in her corner. And she knows it.