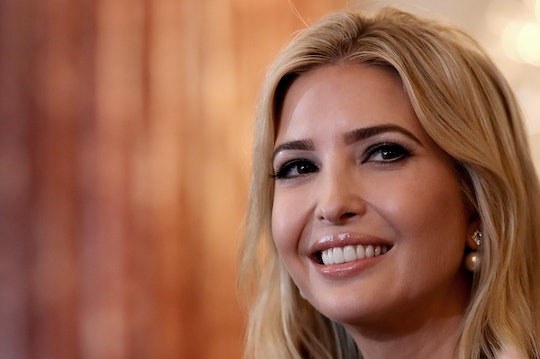 Yes, You Can Be A Feminist & Still Criticize Ivanka Trump

Feminists believe that women have the intellect and drive to do whatever men do — and that includes representing the United States on the world stage. Still, plenty of President Donald Trump's critics were outraged to find out that his daughter had briefly sat in for him at a G-20 summit session Saturday. And, despite what one conservative Fox News guest had to say, those are not at all contradictory stances for people who support women's rights and advancement. Citizens United chairman David Bossie slammed those put off by the decision to have the first daughter sit alongside world leaders as "feminists in name only," but in reality, it's not anti-feminist to criticize Ivanka Trump on that count whatsoever.

Bossie was right in one respect: Progressives on Twitter did not hold back when they found out that Ivanka Trump — a unpaid adviser to the president with no background in politics or diplomacy — briefly filled her dad's seat during a working session at the Hamburg, Germany, event called "Partnership with Africa, Migration and Health." For the most part, the commentators were concerned that Ivanka was both unqualified and unelected, but Bossie was incensed, apparently, that people who support the rights of women in general could question the appropriateness of one particular woman doing this one particular thing.

Here's what Bossie had to say when asked about the situation on Fox News not long after the story broke:

These feminists are only feminists in name only. They’re only feminists when it affects their checkbook. They don’t fight for women across the board. They never have. Whether it’s from Hollywood and what the Hollywood left does, whether it’s the New York elite, what they do, this is just commonplace in America. If you agree with them, they’re on your side and they will fight with you. If you are not on their side, they will demean you in the most ugly terms, and, quite frankly, it's offensive.

Bossie's mini-tirade was in response to tweets on the subject that likely dominated your newsfeed, such as:

How Bossie so fluidly translated this into a feminist (or anti-feminist) issue is beyond me, but let's try to indulge his line of thinking. Apparently, Bossie is making the point that as long as "the left" aims to make the United States a more equitable place for women by ensuring fair access to health care, calling out the gender pay gap, etc., they've completely relinquished their right to criticize any women, ever. But the fact remains: Feminism contends that women deserve equality of opportunity, not immunity from criticism that any person in the position of representing the United States at a meeting of 20 international heads of state is fairly subjected to — nor has it ever argued as such.

If someone were to hypothetically claim that Ivanka Trump was unqualified to sit in her father's place at that meeting, because of, say, past problems in her marriage, that may be considered undoubtedly anti-feminist. It wouldn't be especially feminist if people didn't want Ivanka Trump at the table because they didn't like the way her face looked, or if they falsely believed that her pregnancy could become an inconvenience. But that's not what's going on here.

Trump critics are concerned that Ivanka got a seat at that table simply because she is the president's daughter, and not because she earned the right to be there through her qualifications. Typically, a Cabinet member would take the president's place in such a situation if the president can't make it or has to step out, according to The Hill. Instead, it was Ivanka — perhaps best known for her sharp business acumen, her fashion line, and her unrealistic championing of working women — that the American people saw sitting among world leaders such as Chinese President Xi Jinping, British Prime Minister Theresa May, Turkey's Recep Tayyip Erdogan, and German Chancellor Angela Merkel.

A feminist would be the first to say that, all things being equal, Ivanka should be given just as much opportunity in life to earn the privilege and the responsibility to sit among world leaders as nearly everyone else there was expected to do (her father, President Donald Trump, being one of the few exceptions, given that he, too, lacks any political or foreign policy experience). The fact is, though, that she simply has not legitimately worked her way there yet — and neither has Donald Trump Jr. or Eric Trump. She sat at that table for no reason other than because her father is, somehow, the president of the United States.

Perhaps Bossie noticed that no "feminists" were upset that Merkel or May were participating in the session. That's because both women are elected officials who have worked to gain access to the G-20 and their places at the tables with other leaders. Ivanka Trump boasts no such qualifications or accomplishments. And they wouldn't claim that either of those women shouldn't be there solely because they disagreed with their politics.

Glad we cleared that up.