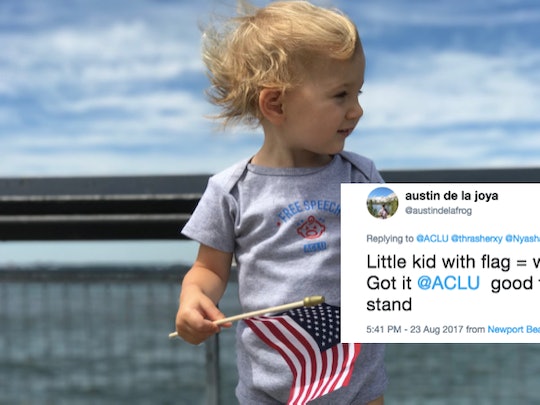 Here's Why People Are Pissed About This ACLU Tweet

During the presidency of Donald Trump, an unabashed known white supremacist apologist, the work of organizations and activists dedicated to protecting and promoting equality for all Americans is perhaps more important than ever. The American Civil Liberties Union (ACLU) is at the forefront of that fight for rights and freedoms, but it recently caught some flak from the progressives with whom it aligns itself. It's not at all surprising that the ordeal went down on social media, but it is a bit unexpected that it involved a photo of a very cute baby. So, here's why people are pissed about this ACLU tweet that made some question the organization's motives.

It all started last week when the ACLU tweeted out a picture of a baby wearing an ACLU "FREE SPEECH" onesie and clutching a little American flag. "This is the future that ACLU members want," the caption read, a riff off a viral meme from March that showcased ridiculous future scenarios to make fun of conservatives. So far, so good, right? Well, the problem is that the ACLU's tweet hit the interwebs just weeks after violent, gun-toting white supremacists rallied in Charlottesville, Virginia, to defend racist Confederate iconography in the name of free speech — and the president of the United States subsequently condoned their behavior.

And the baby in question is blonde and white, a look that's white supremacist-approved, so the image didn't sit well with some.

Almost immediately, the criticism starting pouring into the ACLU's mentions. "A White kid with a flag?!" Temple University professor Nyasha Junior asked incredulously, and so on:

The angry backlash rose up after the ACLU had previously drawn criticism for standing up for the Charlottesville protesters' right to free speech, no matter how abhorrent their views. Since then, the group has decided not to support the First Amendment rights of hate groups that assemble to protest with their firearms in plain view, as those in Charlottesville earlier this month did.

Others, of course, were quick to defend the ACLU's use of a photo of a white child:

Perhaps the ACLU was highly sensitive to accusations that it sympathizes with white supremacists in any way after that kerfuffle, because it responded to the Twitter outrage in less than an hour. "When your Twitter followers keep you in check and remind you that white supremacy is everywhere," it tweeted, above a gif of Kermit the Frog that included the test, "That's a very good point."

It went on to clarify that the future that the ACLU actually set out to promote with the tweet was the fact that the baby was wearing the ACLU onesie. That and other such apparel is for sale on the ACLU's online store.

The child in question is actually a 19-month-old named Isla, according to TIME. Frank Eaton, who describes himself as a "Democratic ad maker" on Twitter, is the baby's father and also snapped the pic of her. When the ACLU decided to share it with its 1.3 million followers, he was struck by the response, as he told TIME:

My daughter becoming a right wing cause célèbre is horrifying, hilarious, and fascinating all at once. My friends were dragging my baby and my enemies were defending her. I mean, I know there's no handbook for parenting, but this is ridiculous.

Of course, it's easy to see why Eaton himself would be less than thrilled about the hate the internet is heaping on his baby, however indirectly. But the whole situation as certainly reminded the ACLU to consider the political climate when tweeting, which will probably only benefit it moving forward.