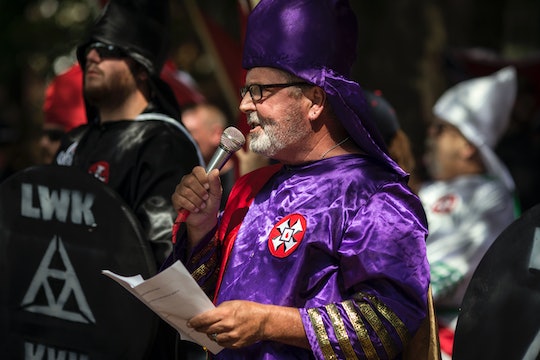 What Is The Alt-Right Rally In Charlottesville?…

Saturday was a dark day in Charlottesville, Virginia. In the wake of the state's landmark decision to take down a Confederate statue, the city braced itself for the second white nationalist protest rally. Friday night saw white supremacists descend on the University of Virginia camps bearing actual torches. As the city declared a state of emergency, here's what you need to know about the alt-right rally in Charlottesville.

The initial impetus for the gathering of white nationalists, white supremacists, and other alt-right groups was reportedly the vote to remove a statue of Confederate General Robert E. Lee. The city of Charlottesville, which is home to the University of Virginia and notably saw 80 percent of voters choose Hillary Clinton in last year's presidential election, also voted to change the name of two city parks which were initially named after Confederate generals. One of which, now named Emancipation Park, became the site of Saturday's rally. The original rally on July 8 was held by the KKK in the same park and drew a crowd of On Friday night, ahead of Saturday's "Unite the Right" rally, white nationalists marched on the University of Virginia's campus on Friday chanting "blood and soil," "white lives matter," and "you will not replace us," according to The Los Angeles Times. Police eventually forced the demonstrators to disband after declaring the group an unlawful assembly.

In preparation for Saturday's rally, Governor Terry McAuliffe of Virginia ordered the National Guard to remain on standby in case violence broke out among the demonstrators. And with good reason; within hours, demonstrators from different alt-right factions began to fight. Video footage shared on social media by several people showed protesters wielding sticks, flags, and even throwing urine as fights broke out.

The rally was planned for noon, but USA Today reported local police ordered demonstrators to disperse before it even began. Gov. McAulifee was forced to declare a state of emergency for the city of Charlottesville. Several arrests were made in connection with the violent rally, according to CNN, as police attempted to regain control of the park.

Police managed to get the crowd under control in quick order, declaring the gathering another unlawful assembly and forcing demonstrators to disperse shortly after the altercations began, according to CBS News.

The organizer of the "Unite the Right" rally, Jason Kessler, told the news outlet that he plans to sue the city. Kessler claimed that the city of Charlottesville violated a court order that allowed the alt-right groups to assemble, and accused the city of violating the group's First Amendment right to free speech.

Order is slowly returning to the city of Charlotteville. Hopefully it will remain peaceful.