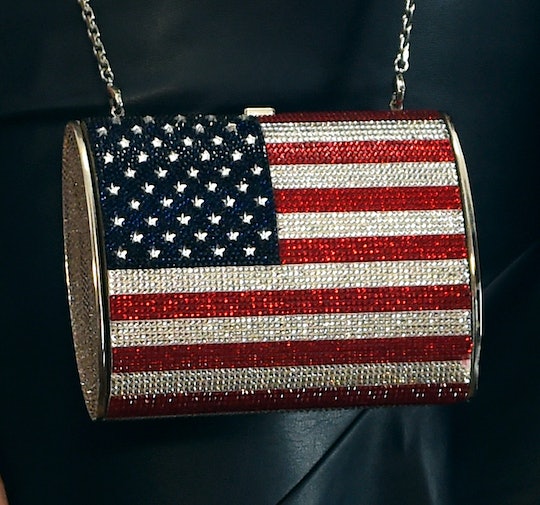 Here's Why Republican Women Will Be Wearing Red, White, & Blue At The SOTU Tonight

As President Donald Trump prepares to give his first ever State of the Union address on Tuesday evening, I doubt very many people are thinking about what he plans on wearing. Because his attire feels rather beside the point, doesn't it? Unless, of course, your clothing is intended to make a statement. A uniform in support of one thing, or in protest of another. While Trump's attire might not be a topic of conversation, the women in politics in the audience are another matter. Here's why Republican women will wear red, white, and blue to the State of the Union on Tuesday, and why many Democratic women won't be.

GOP California Rep. Mimi Walters told CNN that many Republican cabinet members, senators, and support staff members plan to wear red, white, and blue to support the American troops. Walters said these women want to show their "respect for the commander-in-chief" as well as for members of the military:

We want to show patriotism to our country.

The choice to wear the patriotic colors of red, white, and blue reportedly came to fruition based on an in-house email sent by a female member of the GOP, according to Indiana Rep. Susan Brooks, as CNN reported.

The announcement that Republican women plan to wear red, white, and blue to Tuesday night's State of the Union address came on the heels of a similar announcement from the Democrats. Many Democratic women are wearing black to the State of the Union address as a means of supporting victims of sexual assault and harassment. Spearheaded by Florida Rep. Lois Frankel, chair of the Democratic Women’s Working Group, the decision to wear black came about as a means of silent protest against a president many view as flagrantly misogynistic. While the president has hotly denied any accusations of sexual harassment or sexual impropriety levied against him by at least 17 women, as HuffPost reported, he has a well-documented history of anti-female rhetoric that spans decades.

The White House did not immediately respond to Romper's request for comment regarding these accusations.

The Democratic women who plan to attend the State of the Union address will wear black as a means of supporting the #MeToo and #TimesUp movements, both of which are based on ending years of sexual harassment against women in the workplace and beyond. To that end, influential Democratic congresswomen plan to bring sexual assault survivors to the State of the Union address, hoping to highlight the systemic sexism that has allowed such assault to go unchecked for decades.

So here's my question; what is it about trying to end sexual harassment that feels like a partisanship issue? Supporting the troops is obviously something to be commended, but why choose this moment? Why not stand in solidarity with other women to support women during such a crucial moment? When the world is watching, when the president himself might actually stand up and take notice if he is met with a sea of black? Instead of giving him the option to ignore the issue as he appears to do again and again, giving him something else to focus on so he doesn't have to deal with what's right in front of him?

This could have been a moment of unity, to see Republican and Democratic women standing shoulder-to-shoulder, saying #TimesUp to sexual harassment. Instead of yet another missed opportunity, another chance to draw the battle lines against each other. Another case of supporting either this or that (either the troops or sexual assault victims), rather than standing up and supporting both. Because you can support the troops while standing up against sexual assault. Instead of choosing one or the other, the State of the Union could have been a female tour de force. Maybe next year.