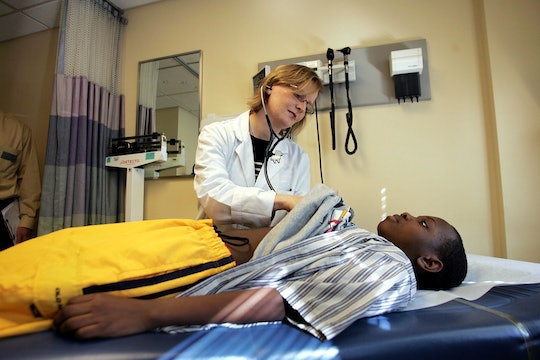 This Is Why The BCRA Is So Harmful To Kids

Senate Republicans are swimming against the current with their new health care plan. The Better Care Reconciliation Act, or BCRA, is intended to replace the Affordable Care Act, but it seems to be coming up against several road blocks. Not the least of which the American people, who are justifiably concerned at the level of harm the BCRA could do to children across the country.

The BCRA, which was penned by Senate Majority Leader Mitch McConnell and 12 other senators, was reportedly meant to be an improvement on the American Health Care Act written by House Republicans and narrowly passed through Congress in May. Instead, Republicans took the frame of the AHCA and adjusted it to make it (let's face it here) marginally worse for Americans with the BCRA. Particularly Americans who rely on Medicaid, as the BCRA plans to phase out federal funding for Medicaid expansion by 2026.

More than 30 million children get access to quality health care through Medicaid, children who are living in poverty, or suffering from disabilities, or living in foster care. The BCRA would slash Medicaid federal funding and could potentially force states to make impossible decisions about which group of the most vulnerable among us should receive care.

According to a report posted by the non-partisan Congressional Budget Office on Monday, the proposed health care bill by Senate Republicans would see 22 million Americans without health care by 2026 — many of whom might have been covered by Obamacare. The BCRA aims to cut $772 billion from essential Medicaid funding over the next decade. What does this mean for children?

Beyond the fact that cutting Medicaid funding will hurt millions of children and potentially keep them from accessing quality healthcare, cuts to this program start from birth: 50 percent of all births in the United States are covered by Medicaid.

There are also 5 million special needs children who rely on Medicaid and the Children's Health Insurance Program. What sort of aid would these vulnerable children receive without funds? The answer isn't quite clear, but it's likely not good.

Another program in peril under the potential passing of the BCRA is Medicaid's Early and Periodic Screening Diagnosis and Treatment benefit. This benefit:

After the blistering report from the CBO exposed so many issues with the BCRA, the Senate has reportedly delayed voting on the bill (which was intended to happen later this week). Whether Senate Republicans will end up taking health care access away from millions of children using Medicaid cuts is, for now, anyone's guess.

More Like This
Parents Are Missing Work At Record-Breaking Rates To Take Care Of Sick Kids
David Harbour Transforms Into A Santa No Kid Wants To See In 'Violent Night'
30 Great Non-Toy Gift Ideas For Kids
Rules, Printables & Tips For Making Elf On The Shelf Magic