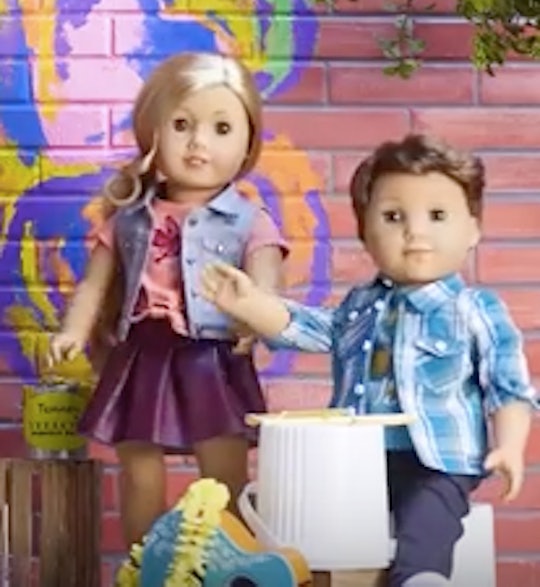 The New Boy American Girl Doll Is Good For My Son

Growing up, I was really into dolls, and I was also a huge history nerd (I still am!) so naturally, the American Girl line of books and dolls was very appealing to me. My parents could never afford to get me the doll I wanted, but I devoured the books, and I always kept a tattered catalogue in my bedroom, which I would flip through and daydream over. Nowadays, I’m all grown up, and I have a child of my own, a child who (at least, at this young age) is into a lot of the same things I was into. He loves baby dolls so I've given him most of my old My Little Ponies, and he seems as excited about them as he is about dinosaurs and cars (which is to say, very excited). I read the news that American Girl is about to release a boy doll and couldn’t stop smiling. My son isn’t old enough for a doll like that yet, but I’m thrilled that he’ll grow up in a world where an "American Boy" doll exists.

The American Girl line of dolls, books, and accessories, has never before featured a male doll (although there was a male bitty baby in the “bitty twins” set). The first three American Girl Dolls were Kirsten, Samantha, and Molly, released in 1986 by Pleasant Company. They were joined by more dolls (including my personal fave, Felicity, who is apparently coming back!) and in 1998 American Girl was acquired by Mattel. As this article in the Atlantic points out, American Girl has undergone many changes since it was acquired, and not all of them are great. There seems to be more focus on modern dolls versus the historical stories of girls facing challenges, learning about themselves, and overcoming harsh, devastating issues, but on the other hand, with Mattel, there's also a bit more diversity. And now, there's a boy.

This new male doll is named Logan Everett, and he plays drums for his friend Tenney Grant, who is a singer/songwriter in Nashville (yes, she is also a doll). I love the fact that he’s a musician, and I especially love the fact that he’s providing backup for a girl musician. I also love that, at least from what we know so far, he appears to be a friend who is a boy, not a boyfriend, which is not to say that no child will ever use Logan Everett as the love interest in their own American Girl story, but unlike with Barbie and Ken, the manufacturers haven’t already set it up that way. Tenney and Logan will be available on Feb. 16 for purchase.

Logan has been a long time coming; parents have been asking for a boy doll in this vein for ages. Last year, two sisters launched a company called Boy Story, which looked an awful like like American Girl dolls, but for boys. And apparently, some resourceful moms have even been DIY-ing their own "American Boy" dolls for their sons for awhile.

When I was a kid, I knew little boys who played with dolls, and I watched them go through some seriously unfair stuff based solely on what toys they liked. Usually, they had to play with their sisters' dolls, and only if their parents were extremely open-minded would they be allowed a single doll of their own. Eventually, they'd be so viciously shamed for their interest in dolls that they'd turn against them, or as their parents liked to say, they “grew out of it.” A combination of mocking from adults and peers, lack of access, and the fact that all of the marketing for popular dolls was so clearly aimed at girls only, taught these little boys that it wasn’t OK to like what they liked. The fact that there were so few male dolls on the market wasn't the whole story, but it was part of the shame.

For little boys who love dolls, having one more boy doll, especially one in such a major brand, could be a very big deal. It could mean one more doll he (and other boys like him) won’t get mocked for playing with. It could mean removing one more layer of the subtle (and sometimes not so subtle) messaging that dolls just aren’t for boys. As a mother, how could I not want that?

My own child is still pretty young, but his imagination is currently going through some explosive growth. Like most kids (at least in my experience), his interests aren’t nearly as gendered or narrow as many adults would like to believe. He loves cars and trucks and basketball, but he also loves cooking in his play kitchen and taking care of his two baby dolls. He’ll happily spend ages making both plastic dinosaurs and brightly colored ponies walk all over our couch, and climb his parents’ bodies. He’s a complex human being with a wide variety of things that strike his fancy.

The fact that one of the many things that he enjoys happens to be dolls doesn’t have to mean anything about his gender. To be clear, my wife and I are both very aware of the fact that we have no way, at the tender age of 2, to be certain that he’s cisgender. If he turns out to be trans, we’re 100 percent on board with that. And if it turns out he loves sports and loses interest in dolls? We’re 100 percent on board with that as well. But if he does turn out to be a boy who likes or even loves dolls, if his interests stay in vein with what they are now, I want him to have options. For little boys who love dolls, having one more boy doll, especially one in such a major brand, could be a very big deal. It could mean one more doll he (and other boys like him) won’t get mocked for playing with. It could mean removing one more layer of the subtle (and sometimes not so subtle) messaging that dolls just aren’t for boys. As a mother, how could I not want that?

I don’t know who he’ll be when he’s older, and I don’t know if we’ll end up getting him this particular doll down the line. We aren’t exactly made of money, and American Girl dolls aren’t cheap. Also, they’ve been introducing and removing dolls from the line so fast, there’s no telling what they’ll even have available once he’s in the target age range. Who knows, maybe by then they’ll have three or four boy dolls, and Logan will be long gone. But the fact that my child could, if he wants to, participate in something that I was so excited about as a kid, totally warms my heart.

For now, I’m just going to watch my son push his ponies around in his dump truck, and put his baby dolls to bed on top of the piano while saying “bee-bee!” over and over again to himself. We’re going to be glad that a teeny tiny bit more gender inclusivity exists in the world of kids’ toys, and cross our fingers that this is a sign things are really moving in that direction.