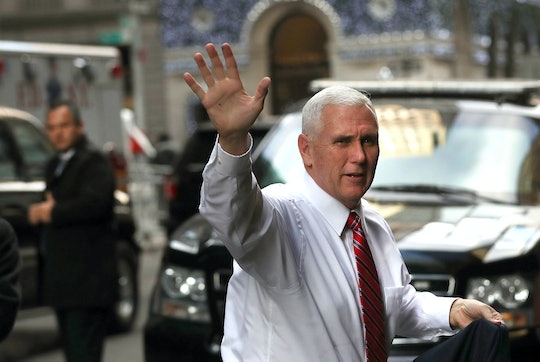 Why Trump's Impeachment Wouldn't Be A Move Forward

Donald Trump — who tweeted Monday that the United States should expand its nuclear arsenal, which many considered a call for a global arms race — is widely considered the least-prepared, most bombastic, and most potentially destructive soon-to-be president in modern history. He'll also bring to the office conflicts of interest of an unprecedented scale and a shady, undefined (and oft-denied) relationship with the president of Russia, which the CIA and FBI found interfered with the election so Trump would win. His background and current stances inspire progressives to revile him and for some to dream of his impeachment, but the alternative is hardly better. In fact, Trump's impeachment wouldn't be a huge move forward at all, because although he's joked about grabbing women "by the p*ssy," his VP, Indiana Gov. Mike Pence, sports a record that similarly poses a huge threat to women and other marginalized populations.

Indiana Gov. Mike Pence rose to national prominence in 2015, when he signed off on a law that allows businesses in the state to refuse service to LGBTQ individuals if the businesses are guided by religious beliefs. But, as Guardian columnist John Paul Brammer summed up "Pence has been passing off bigotry as policy his entire career." And, now, he's one heartbeat, or on series of not-unfathomable successful impeachment proceedings, away from the highest office in the nation.

Pence was first elected to public office when he became an Indiana congressman in 2000, a spot he won partly on his platform of dismantling the rights of those who don't identify as straight — a mission that would morph into a career-long crusade. During that run for Congress, Pence called for the diversion of federal funds that supported helping those with HIV to access medical care and other services to "institutions which provide assistance to those seeking to change their sexual behavior." Although he did not say it outright, this more than likely refers to conversion therapy, a punishing non-therapy that's illegal in some states, because it aims to alter a person's sexual orientation and usually accompanies family rejection, which increases the risk of substance abuse, depression, and suicide in LGBT youth, according to the Human Rights Campaign.

Pence has also gone on the record stating his belief that marriage equality would cause "societal collapse" (it hasn't), and, of course, opposed President Obama's recent directive to all schools to allow transgender students to use the facilities designated for the gender with which they identify, not the one that appears on their birth certificates.

The incoming vice president also has a harsh stance on women's bodily autonomy when it comes to abortion. Specifically, he'd like to banish the landmark 1973 Supreme Court ruling that legalized abortion "to the ash heap of history." As governor, he signed into law a bill that would have banned abortion even when the fetus has a severe genetic abnormality, as well as mandate that aborted fetuses be buried or cremated, if a federal judge did not later rule it unconstitutional and block it, according to Mother Jones. Oh, yeah — Pence also defunded so many of the Planned Parenthoods in his state that the resulting closure of the one in Scott County triggered a massive HIV outbreak there, because it effectively eliminated local access to care.

There are, of course, many other indicators that Pence is a rightwing zealot masquerading under the guise of civility: He once delivered a speech before Congress in support of the teaching of creationism in public schools. Skeptical of climate change, he pledged this year not to comply with a federal rule to reduce greenhouse emissions. He worked to prevent the resettlement of Syrian refugees in his state. The list goes on and on and on.

Mike Pence and Donald Trump are a particularly formidable force because they will have the strength of a Republican-controlled House and Senate behind them. And as an establishment darling, a President Pence could very well make serious headway in making his vision for Indiana reality for the Untied States. Unlike, Trump, Pence has a proven track record of being able to legislate beliefs that hurt marginalized communities.