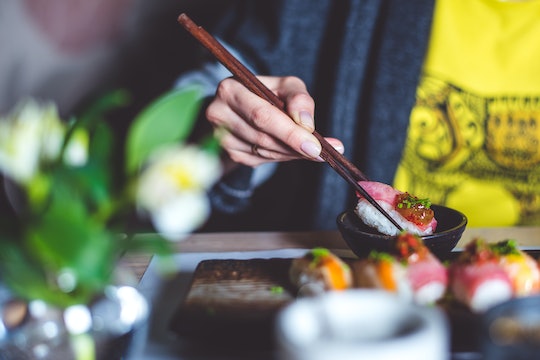 Here's Why You Should Stay Away From Sushi When You're Pregnant, According To Experts

Most women who get pregnant quickly realize there's a list of things you're not allowed to eat or drink for the next 40 weeks (more or less). From soft cheese to deli meats, to alcohol and too much caffeine, the list is long and a somewhat unpleasant. There's a reason why that lists exists, to be sure, but does it have to be so unforgiving? I mean, why can't you eat sushi when you're pregnant? It's not because life is unfair, my pregnant friend, although it sure as you-know-what can feel like it.

According to BabyCenter, women who are pregnant should only eat fish and shellfish that are cooked to 145 degrees, which means sushi is usually and firmly on the "no" list for the next nine months. BabyCenter goes on to quote the Centers for Disease Control and Prevention (CDC) and the Food and Drug Administration (FDA) as to why, explaining, "Cooking fish to this temperature destroys any potentially harmful parasites and pathogens (other disease-causing organisms such as bacteria and viruses)." So that pretty much sums it up, right? The problem with sushi is the high rick of bacteria, but what does that bacteria mean for your body and your baby?

When you're pregnant, your immune system is suppressed so that your body doesn't attack the fetus (and/or fetuses) growing inside of you. But that suppressed immune system also means you're more susceptible to illnesses that can come from contaminated food, according to BabyCenter, like listeriosis.

Now, you can still head on over to your favorite sushi spot and and munch as much as you'd like, so long as what you're choosing off the menu doesn't contain any raw fish. Most sushi restaurants have many other options that include fully cooked fish, shellfish, or other seafood.

You might have also heard that you're supposed to avoid eating too much fish when you're pregnant, because you shouldn't consume a significant amount of mercury while you're growing a baby. The key is to monitor how much fish you're eating each week, according to Parents. Dietary guidelines provided by BabyCenter recommend that pregnant women have between eight and 12 ounces of fish each week, but not too much more than that to avoid too much mercury in your blood stream.

Finally, any eggs and meat you plan on eating when you're pregnant need to be fully cooked, too, and for the same reasons. Those ingredients can be contaminated with bacteria, like salmonella or listeria, that pregnant women can be especially susceptible to.

What else is on the list of things you can't eat when you're pregnant? Well, soft cheeses are off the list, if they are ripened in mold, because they can contain listeria bacteria that can be harmful to pregnant women and their unborn babies. That means brie, camembert, and any mold-ripened goat-cheese are out of bounds while you're pregnant. Ugh.

But at least chocolate isn't off the list while you're growing a baby, right?