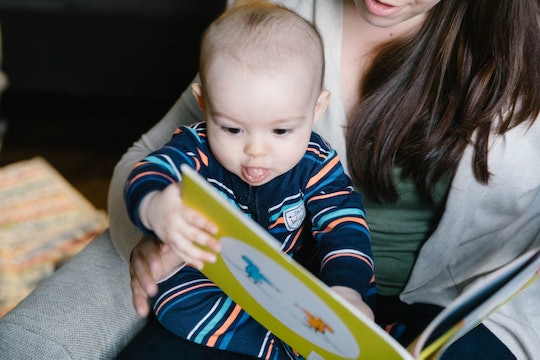 Here's Why Your Baby Drools So Much, According To Experts

Playtime with your baby is such a wonderful experience. They’re cooing, giggling, and laughing while you raise them above your head, and as their sweet face stares back at you, you may feel compelled to say, “I love you.” Except when you open your mouth to say those magical three words, it seems like Niagra Falls is suddenly coming out of your baby’s mouth and directly into your open one. At this moment, wide eyed and grossed out, you may be wondering why your baby drools so much, and literally no one could blame you — yuck.

Daniel Ganjian, a pediatrician at Providence Saint John’s Health Center in Santa Monica, California, tells Romper that most babies start drooling around 3 months because this is when their salivary glands begin to develop. However, if your baby is drooling a lot before that, Ganjian says that could be a bad sign. “Immediately after birth, too much drooling (along with vomiting and other symptoms) can be a sign of a damaged esophagus, such as with Tracheo-Esophageal fistula, which fortunately is relatively rare,” he says.

What is the purpose of this somewhat gross thing that all babies do? Ganjian says, "Saliva is an important chemical that helps keep the mouth clean. It also binds food particles together and lubricates them for easier swallowing." Drooling is a sign of your baby’s salivary glands developing and can increase when they’re teething or doing certain activities. And Ganjian adds that it can sometimes happen when your baby smells certain foods, kind of like when your mouth waters when you smell a large, hot, cheesy pizza.

What about the amount of drooling? While it may seem like it never stops, typically, too much or too little drool isn’t an issue, as long as it’s not accompanied by other symptoms, which include fever, rash, or spots in the mouth, Ganjian says. “Let your pediatrician examine the baby to make sure it is not a mouth/throat infection, such as gingivostomatitis (oral herpes), hand, foot and mouth, or epiglottis. The drooling might increase with teething, mouth/throat infections, smell of certain foods, or when doing certain activities,” he says. Though rare, Ganjian says too much drooling could be an early sign for uncoordinated swallowing reflex.

When does this end? Ganjian says typically, drooling decreases by 18 months and should stop altogether by the time your child is 2 years old.

Though gross, excessive drooling is a pretty common thing babies do, and there’s no need to worry unless there’s other symptoms that occur with it. Just be careful when you’re holding your baby above your head — and keep your mouth closed. Nobody likes it when drool drips into their mouth.

More Like This
When Does A Baby Recognize Their Father? A Pediatrician Explains
Covid Vaccine “Deserts” For Kids Under 5 Make It Almost Impossible For Parents To Find Shots
Why Is My Discharge Brown? Experts Explain
Here's Why Your Vagina Burns After Sex
What Parents Are Talking About — Delivered Straight To Your Inbox