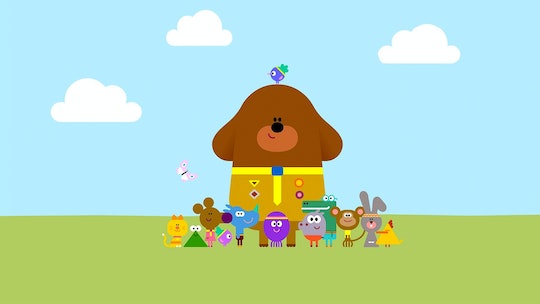 'Hey Duggee' Is Teaching Your Kids Something Super Smart, But You Might Not Have Even Noticed

I watch a lot of children's television. Nursery rhyme channels like Little Baby Bum and ChuChu TV have become the soundtracks to my daily life — never far from ear shot whether I'm cooking, writing, or trying to pay the water bill through an automated voice message. I know all the words to Moana, Elsa, and Anna's songs, and have found myself singing them even when I am alone in the car. After my 2-year-old got a dollhouse for Christmas, it was her replicas of Spirit Riding Free characters that she chose to put inside it (horses included). Of all the shows and films that accompany us through the everyday, though, there is one that my family seems to hold most dear: The BBC's Hey Duggee.

The British program airs on CBeebies (the BBC's children's network) in the UK and on Nick Jr. in the U.S. Its premise is fairly simple. Duggee, a big, brown, silent dog, is the leader of a clubhouse. In each episode, he teaches his "Squirrels" (little creatures sort of akin to Scouts) a new lesson. By the end of the seven-minute narrative, they each earn a badge. The lessons encompass practical skills (like learning how to tidy, sew, apply basic first aid, or go camping), textbook education (like discovering fossils or outer space), and potential interests or hobbies (Duggee teaches the Squirrels about fashion, music, comedy, and yoga).

There is a lot to love about Hey Duggee, from its educational yet entertaining plots, to its bright color scheme, to the humor of all its characters (including secondary ones, like the pretentious Tino the Artistic Mouse or the hippie dippy rabbits that grown-ups might associate with aging stoners). What I love most about it lies in the background, though, in the inclusive representation of various types of people. The inclusivity is subtle enough that we aren't necessarily supposed to think about it. Instead, we simply accept it. Much like we should in the real world. Much like we should be teaching our children to.

Although we might be watching the antics of an animated dog, an octopus (Betty), a crocodile (Happy), a mouse (Norrie), a hippo (Roly), and a rhino (Tag), there are small details we can observe about the protagonists' lives that feel like subtle nods to the differences among actual people. Take the modes of transportation the Squirrels and their parents use to get to the clubhouse. Tag and his dad ride the bus. Roly and his parent cycle. Happy and his mother drive their little compact car, while Norrie and hers cruise in a wooden convertible. Betty can be observed in a submarine on wheels.

It's a simple thing, but an important one. Some families rely on public transportation. Others drive. Others use bikes. Some own luxury cars. Others can only afford bus fare. Some might simply prefer to take the bus or a tram or to walk. The point is, there is no right or wrong way to get around, even though, in real life, there are communities where some means of transport are stigmatized more than others; thought of as somehow less than.

They are simply there, to subtly remind us that the Squirrels get along with one another even though they come from different places, and have different families, and represent completely different personalities.

If we further analyze the Squirrels' homes, it isn't far-fetched to deduce that they all come from various backgrounds, and possibly various economic backgrounds, too. Norrie lives in a treehouse. Happy lives in a large two-story home. Roly lives in a little toadstool-looking house. Tag lives in an apartment building. Betty lives in a beach hut. They all have the privilege of a roof over their heads, but the roofs don't look the same. Again, their homes are only in the background and never factor into specific plot points. They are simply there, to subtly remind us that the Squirrels get along with one another even though they come from different places, and have different families, and represent completely different personalities.

The fact that we seemingly aren't meant to question the differences among the characters only serves to make the show and the universe it is set in all the more appealing. Take Happy, for example. The forgetful, puddle-loving crocodile has an elephant for a mother. All of the other Squirrels match their parents in term of species. It's reasonable, then, to assume that Happy is adopted. He doesn't look like his mother, and that's OK. It isn't something to be questioned, or thought of as peculiar. They are one type of family, in a world with infinite types of families.

A similar feeling is evoked in Season 2 during "The Making Friends Badge." In this episode, we are introduced to Peggee, another clubhouse leader, and her Hummingbird troupe. Among the Hummingbirds is Rochelle, who uses a wheelchair. No one asks Rochelle about her disability, though. No one mentions it at all, in fact. She is a Hummingbird, just like the rest of her friends. She dances among them and holds her own and isn't made a spectacle of in the least.

The integration of characters of all abilities, sizes, shapes, backgrounds, and family lives is, for me, what makes Hey Duggee such a joyful watching experience. Its diversity does not feel performative, but natural, easy, and reflective of a culture that embraces variability. When I think of my own children and the way they might someday react to people's differences, this is what I hope for: innate acceptance.

There was a time when my husband and I thought we'd be able to keep our kids away from screens until they were, I don't know, 12. We'd look at 5-year-olds with newer versions of the iPhone than the one I carried in my purse, and think, "Nope, there's no way." It was not a feeling born of judgment against other parents, so much as of the desire to teach our kids to enjoy any given moment, as and when it's actually happening.

Considering that both my partner and I are millennials existing in 2019, that I work on the internet, and that Netflix is just as much a staple in our home as a radio might've been in my grandma's, those hopes might've been somewhat naive. Our 2-year-old has always been drawn to the images she sees on our cells and laptops, and these days, she's getting more and more into full-length programs.

Screen time doesn't have to be a bad thing, though, particularly when your kid is watching something useful: Something that can teach them a thing or two. I don't doubt that Hey Duggee will do precisely that. My daughter might pick up some tips on how to set up a tent, or make homemade jam, or work well in a team. More importantly, however, Duggee might just help her learn to think inclusively.

To understand that all families look different, and all people look different, we should welcome these distinctions with the cheer and lack of fuss shown by this show's creators.