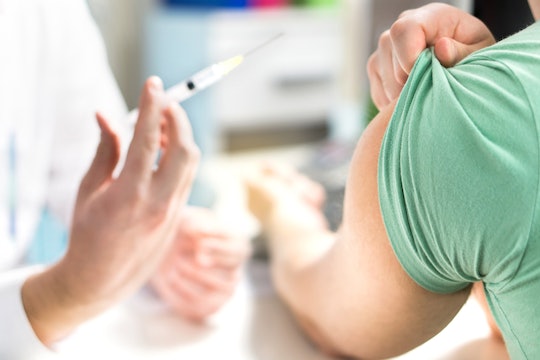 Teen Explains Why He Got Vaccinated, Despite His Parents' Anti-Vaxx Beliefs

In an effort to reclaim and protect the future of his health, one high schooler of anti-vaxx parents has spoken out about why he decided to get vaccinated on his own after turning 18, despite his parents' objections, as HuffPost reported. Ethan Lindenberger of Ohio recently turned to Reddit for advice on how to get vaccinations, and his now-viral post has served as a sobering look at the reality of the misinformation that's circulating about vaccines, and the serious impact it can have on a person's health, and in some cases, life.

In Lindenberger's post on Reddit, first shared two months ago, he wrote that his "parents think vaccines are some kind of government scheme." "It's stupid and I've had countless arguments over the topic," he wrote on Reddit. "But, because of their beliefs I've never been vaccinated for anything, god knows how I'm still alive..."

Lindenberger, a high school senior, went on to ask those reading on Reddit for advice to help him find resources and clinics where he could possibly get the shots that could save his life.

Eventually, his story became more and more popular. Recently, Lindenberger spoke with NPR and explained that he did some research himself, and the truth became clearer. "When I started looking into it myself, it became very apparent that there was a lot more evidence in defense of vaccinations, in their favor," he told NPR's Weekend Edition, adding that his mother's response "was simply 'that's what they want you to think.'"

He added in the same interview, "I was just blown away that you know, the largest health organization in the entire world would be written off with a kind of conspiracy theory-like statement like that."

On Tuesday, Lindenberger explained during an interview with Good Morning America that he grew up hearing he wasn't vaccinated because it was "bad for him," and that they'd have "bad side effects."

"I saw that there were a lot of people with different opinions, and as I explored those opinions, I came to the conclusion that they were good and beneficial," he told Good Morning America.

It's only been within the past decade or so that the anti-vaxx movement has picked up steam, likely in correlation with an uptick in diagnoses of autism. And for the record, the Centers for Disease Control and Prevention has already disclosed that there is absolutely no correlation between vaccines and autism.

Those against vaccinations are often fearful of things like possible side effects and have an overall "distrust" in the safety and effectiveness of vaccinations, despite the CDC's research and recommendations.

Still, there's a rising movement of people refusing to vaccinate their children, which, in turn, makes them susceptible to life-threatening diseases that were eliminated a long time ago. And though we often hear from parents about why they do or do not agree with vaccination, it's only recently that we are starting to hear from the kids who are being impacted by these choices.

Lindenberger's story provides a really sobering look at the reality of someone who didn't have a say in whether or not he was immunized against some of the most lethal and widespread diseases that humanity has ever faced, all because of what essentially boils down to falsely held beliefs that go against science.