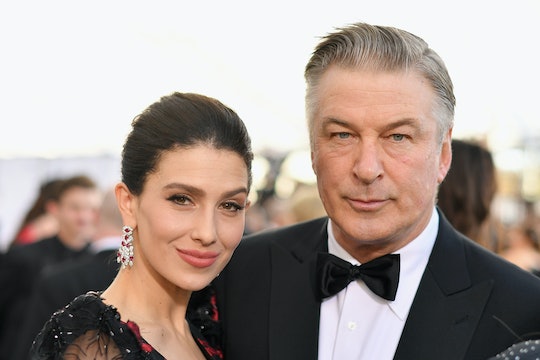 Stepparents are everywhere. They are at the school picking up their stepkids from kindergarten class and at graduation ceremonies and family dinners. People have children and their relationship ends and then they try again in a new relationship and I think it's about time we start acknowledging that this is our normal in 2019. Because despite the prevalence of stepparents we don't talk about them a whole lot, do we? Especially if you are a stepparent; it can feel like awfully murky water to traverse. Which is why it's so great that Hilaria Baldwin opened up about being a stepmom to Alec Baldwin's daughter with ex-wife Kim Basinger... perhaps her post can be considered a jumping off point in starting an important conversation about a confusing role in so many families.

Hilaria Baldwin shares four children with husband Alec Baldwin; 5-year-old daughter Carmen, 3-year-old son Rafael, 2-year-old son Leonardo, and 11-month old son Romeo. But those aren't the only children in the family, of course. Alec Baldwin was married to actress Kim Basinger from 1993 to 2002 and has 23-year-old daughter Ireland from that marriage. While Hilaria shares a lot of posts about her family on social media she hasn't said much in the past about her stepdaughter Ireland.

She decided it was time to change all of that on Thursday.

In an emotional Instagram post Hilaria Baldwin addressed the fact that she has been cautious to open up about her relationship with Ireland in the past because:

I wanted to make sure I did right by the family I was stepping into when I married Alec.

She decided to talk about her relationship with Ireland, who she says she "loves as much as my other children," because she's proud of the relationship she has built not just with Ireland but also Ireland's mother, Kim Basinger, as per CNN:

Having a stepchild is a delicate matter. Especially one who is grown. I think my relationship with her has been so successful because I never tried to step in as her mommy. She has a good mother, who I have tremendous respect for...and I put myself in Kim’s shoes: if my children ever had a stepmother, I’d want her to let me be number one.

It can be a difficult thing, trying to suss out your role as a sort-of parent but sort-of not, and it seems as though Hilaria has figured out the magical ingredient; not trying to erase the past, as she wrote on Instagram:

As someone who loves her, my job was not to step in and take over...but rather respect what had been for the first 15 years of her life and then become a part of that, in a way that works for everyone. So yes, sometimes my language about my biological children does not include her. Because I did not birth her and I never want to disrespect the fact that she has a wonderful mother.

Baldwin ended her post by saying that she truly loves Ireland and needs her in her life, and that she is one of the "best things that ever happened to me." This wording speaks volumes, in my opinion. Because it says more about Ireland's influence on her life than the other way around. Because isn't that what stepkids need? To feel seen and loved and respected by every person in their life without being asked to choose sides.

I hope people read Hilaria Baldwin's post and think about what she has to say here. Because she is clearly on the right path.