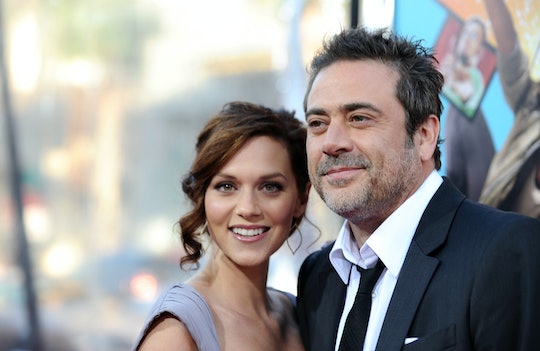 Hilarie Burton Opens Up About Her "Heartbreaking" Journey To Welcoming Baby No. 2

It is so deceptively easy to get caught up in the beautiful lie that is celebrity, especially when it comes to pregnancy and motherhood. How many times have you stood in line at the grocery store, heartbroken and exhausted from some everyday moment of parenting that can feel both trivial and momentous all at once, only to see a smiling celebrity making it all look effortless? Or worse, heartbroken and exhausted from simply trying to become a parent. Which is why posts like this one from Hilarie Burton about her "heartbreaking" journey to welcoming her second child are so important... to peel back the superficial veil of celebrity to show the reality behind the apparent perfection.

The One Tree Hill actress took to Instagram to share the news that she and her husband, Jeffrey Dean Morgan from The Walking Dead, recently welcomed their first baby together. A daughter named George Virginia Morgan, who joins big brother, 8-year-old Gus. It's an exciting time, and Burton shared the requisite photos of a sweet sleeping baby curled up on a rug, in the arms of her mother and father and brother. It's the magic of every day. But Burton doesn't want anyone to be fooled by these happy family photos... they came at a great cost and after years of heartbreak.

Burton wrote on Instagram that she decided to share news of her baby's birth before Morgan "spilled the beans" on her, but she also wanted to share a message with women who are struggling to conceive:

It took a long time for Jeffrey and I to have this baby. The first time I got pregnant, it took a year and a half. I surprised him on Christmas with baby Seahawk booties. We cried. We celebrated. We picked out names. And we lost that baby. More losses followed, and as so many couples know, it was heartbreaking. It still is heartbreaking.

Burton went on to admit that, while she might be an actress and celebrity in her own right, she found herself devastated by the constant deluge of seemingly easy breezy pregnancies other stars appeared to enjoy. For five years, she and Morgan tried and could not conceive, she wrote:

Every morning of the five years it took us, I'd open my computer at the kitchen table and see the news and I'd grow bitter over the endless parade of celebrities showing off their bumps and babies. I'd weep out of jealousy for how easy it was for them.

When she and Morgan were able to conceive and successfully deliver their beautiful daughter, Burton didn't want to become another one of those celebrity parents who gives an impression of false perfection, as she wrote on Instagram:

I don't want her birth to cause any other woman to weep at her kitchen table. If anything, my wish is that she would restore hope for others. Fertility is a fickle thing. And for the other couples out there who have had dark days, we want to introduce our miracle baby to you and send you our love and support in finding yours.

Fans were incredibly moved by Burton's generosity in sharing her story.

Burton ended her post by sharing her absolute joy at welcoming her baby girl, of course. And fans couldn't be happier for the family. Perhaps especially so when they were able to get a glimpse inside Burton and Morgan's journey to baby George. To understand that these social media posts of adorable babies and happy families are always only part of a much larger picture.

I hope Burton's post helps a family who continues to struggle hold onto a little hope. Because, as she wrote, "fertility is a fickle thing." No matter who you are.