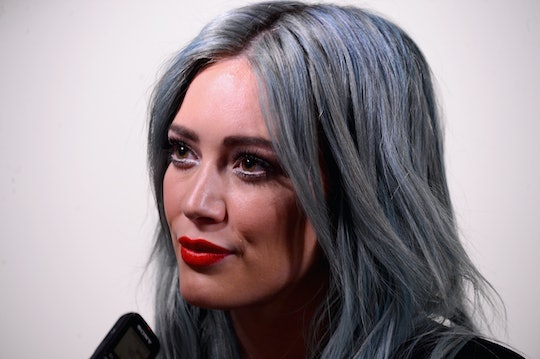 Breastfeeding remains one of those incredibly touchy topics for new moms. Which is really saying something because being a new mom is essentially a breeding ground for sensitive topics. And, of course, by extension the decision to stop breastfeeding can be just as emotional no matter who you are. Emotional enough that sometimes it's hard to really put your finger on what is getting you so down. For anyone out there who might be struggling with the end of their particular journey please refer to Hilary Duff's Instagram immediately. On Tuesday night, Duff shared that she stopped breastfeeding baby Banks after six months in a super candid post that totally nails all of those conflicting emotions so many of us will recognize.

The Younger star and Matthew Koma welcomed daughter Banks on Oct. 25, 2018 (Duff is also mom to 7-year-old son Luca with ex-husband Mike Comrie), according to USA Today. Like so many other new moms out there, Duff had to head back to work after she gave birth. And again like so many other moms out there, this meant Duff decided to try pumping her breast milk in order to continue breastfeeding her daughter, as she told her 11 million Instagram followers in a surprisingly raw post.

Duff explained that she had initially made a decision to try breastfeeding Banks for six months and then see how she felt at that point. It seems it wasn't exactly going well.

"Pumping at work sucks," she shared on Instagram. "I had zero down time and am usually pumping in a hair and make up trailer while four hands work to get me ready for the next scene with lots of other people around."

She continued, "Even if I had the luxury to be in my own room, it’s not even considered a 'break' because you have to sit upright for the milk to flow into the bottles! Plus you are having your damn nipples tugged at by an aggressive machine that makes an annoying sound, that echoes through your head day and night (I swear that machine and I had many conversations at midnight and 3 am)!"

Duff certainly isn't alone in finding pumping breast milk at work a bit of a deterrent. Despite the federal law under the Affordable Care Act that requires workplaces to offer time and space for mothers to pump breast milk, according to Harper's Bazaar, millions of women stop breastfeeding when they head back to work because it's simply too difficult.

The actress went on to admit that she felt "lucky" to have been able to give Banks six months of breastfeeding. She wrote on Instagram:

I know many women are not able to and for that I am sympathetic and very grateful that I could. For six wonderful months. But I needed a break. I was going to break. With the stress of a dropping milk supply and a baby that was getting bored or not caring about nursing when I was available to. I was sad and frustrated and feeling like a failure all of the time. When really I’m a bad ass rock star. Moms get high on feeling like superwoman…because we are! Doing too much, because we can!

So here is my favorite part of what the mom of two had to say about the end of her breastfeeding journey: after all that agonizing and worry, it turned out perfectly fine. She feels better and Banks is "thriving," writing on Instagram: "Banks is thriving and I get even more time with her and daddy gets to do more feeds! And mommy gets a tiny bit more sleep!"

She concluded the post, "Love you all and hope this helps anyone struggling! See you nursing bras... until next time!"

This is further proof that the best thing for your child is a healthy, happy mom who feels good about the decisions she's making. I hope other moms read Duff's post and realize that they're not alone. That they're allowed to feel stressed... and they're also allowed to feel relieved when they're finished breastfeeding.